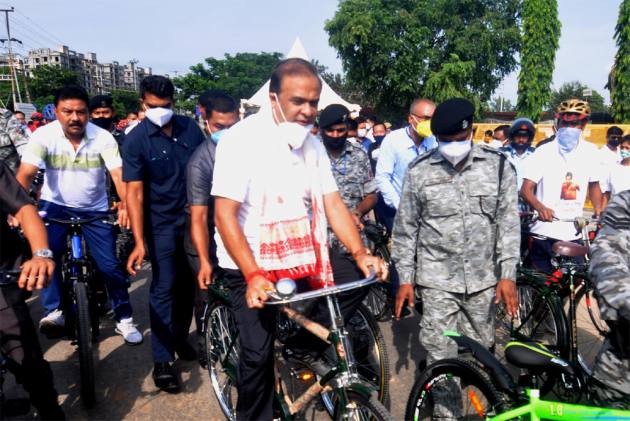 For Horen Gogoi the clock suddenly seems to be ticking slow and Saturday morning appears to be eons away. “I can’t just wait for the moment,” he says. It is on Saturday morning when his neighbour and resident of nondescript Baro Mukhia village in Golaghat district of Assam, Lovlina Borgohain will step into the ring to begin her quest for Olympic glory in boxing; she will be Assam’s first woman Olympian and the second pugilist from the state after Shiva Thapa.

Gogoi had come down to Guwahati on Wednesday to participate in a bicycle rally organised to wish her luck. Led by chief minister Himanta Biswa Sarma, the rally, aptly named ‘Go for Glory, Lovlina’, saw the participation of MLAs and ministers besides government officials and a large number of citizens who covered around six kilometres.

“Our village is on tenterhooks. In fact, all of Assam is. We are all praying hard for her and want to see her return with a medal,” Gogoi told Outlook. “Hers has been an incredible journey and I am fortunate to have witnessed it from up close,” Gogoi said.

Borgohain said Lovlina was in touch with the family. “She speaks to us almost every day from Tokyo. We hardly discuss boxing, though. Her mother, instead, is more concerned about how she is keeping…she advises her to eat and sleep well,” he said. “I just tell her not to take the pressure and keep away from social media to avoid any distraction. The preparation is complete and now only the matches are left,” he said. “We last met her in February in Kolkata when she had come down for her mother’s operation,” he said.

He said Saturday would just be her first fight and there will be a long way to go. “It is only if she wins in the semifinal that she will be assured of a medal. But before that she has to fight her way through three matches, including the quarter-finals,” he said. “Yes, people are all looking forward to Saturday,” he said adding, “but win or lose, we are happy she has made it to the big stage.”

“I still can recall the day when she and her two elder twin sisters would carry their bicycles on their shoulders and their slippers in their hands because the roads would be slushy from the rain, and walk up to the road outside the village before being able to ride their training,” Gogoi said.

Lovlina’s sisters -- Licha and Lima -- excelled in Muay Thai and are now employed with the CISF and the BSF respectively. She herself had started with Muay Thai when she was in Class 9 before switching over to boxing in 2012. There has been no looking back since she qualified for the Olympics in March last year in the welterweight category (69 kg) and also picking up the Arjuna award some months later.

She has said she is focused on the Olympics, which has been her goal ever since she had slipped on the gloves. She had also got a tattoo of the five Olympic rings done on her left wrist in 2015 to act as a constant reminder.

It’s not too long for the bell to ring, no matter what Gogoi may feel.