Peaty was the world-record holder and the first man to break both 58 and 57 seconds in his signature event, 100-meter breaststroke 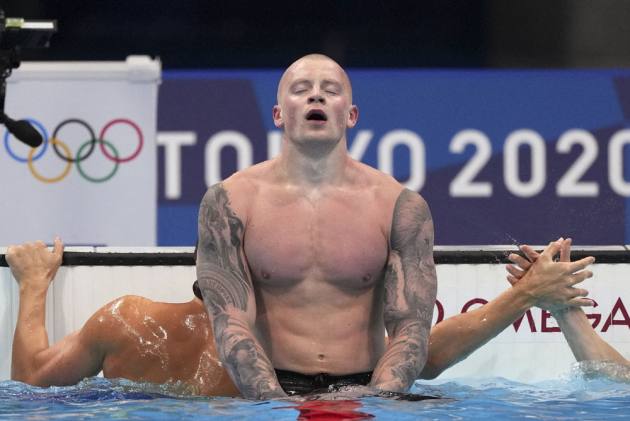 Perhaps the surest bet at the pool, Britain's Adam Peaty repeated as Olympic champion in the men's 100-meter breaststroke at the Tokyo Aquatics Centre.

Peaty was the world-record holder and the first man to break both 58 and 57 seconds in his signature event. He posted the fifth-fastest time in history (57.37 seconds) to blow away the field.

Arno Kamminga of the Netherlands claimed the silver in 58.00, while the bronze went to Italy’s Nicolo Martinenghi in 58.33. American Michael Andrew was next in 58.84 -- the second straight final in which a U.S. swimmer finished fourth and was denied a medal.

Maggie MacNeil captured Canada’s first gold medal at the pool with a victory in the women’s 100 butterfly.

The reigning world champion touched first in 55.59 seconds, edging out Zhang Yufei of China (55.64) for the top spot. Emma McKeon of Australia took the bronze in 55.72, beating American teenager Torri Huske by one-hundredth of a second.

Huske went out fast, as is her style, and appeared to be close to the front with about 10 meters to go. But she faded on her final strokes and just missed a spot on the podium.

So did Andrew, meaning the U.S. team had been denied a medal in the first two finals Monday.

The morning’s biggest races were still to come.

The powerhouse American team got off to a rousing start at the Tokyo Aquatics Centre, capturing six of 12 medals on the opening day of finals. That was more than they ever won on the first day during Michael Phelps’ stellar career, which encompassed the last five Olympics.

Phelps retired from competition after the 2016 Rio de Janeiro Games and is doing commentary for American broadcaster NBC at these Olympics.