De Grasse powered past a pair of Americans — Kenny Bednarek and Noah Lyles — to finish in 19.62 seconds and take one of the titles that Usain Bolt had owned for the last three Olympics 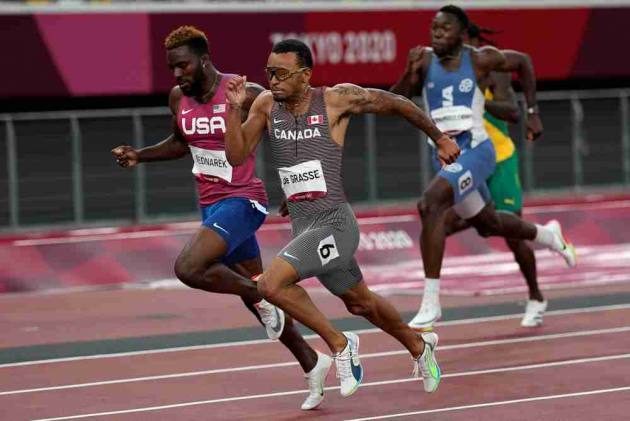 Perhaps the world's next sprint star wasn't so hard to find after all. Tokyo Olympics | Full Schedule | Sports News

He's Andre De Grasse, the Canadian who ran his first sprint in baggy basketball shorts and borrowed spikes, and now has an Olympic gold medal in the 200 meters.

De Grasse powered past a pair of Americans — Kenny Bednarek and the favourite, Noah Lyles — to finish in 19.62 seconds and take one of the titles that Usain Bolt had owned for the last three Olympics.

It ends a string of close calls for the 26-year-old and fills out a medal collection that was only missing a gold. De Grasse won bronze four nights earlier in the 100 to go with the third-place medal he took in Rio de Janeiro.

He also won a silver in the 200 there, though his stay in Brazil is best remembered for the time he had the audacity to mess with Bolt.

It was a semifinal race and the two were far ahead of the field and easily going to make the medal race. But De Grasse kept pushing. It forced Bolt to kick things back into overdrive.

Bolt won the race but playfully wagged his finger at De Grasse. The moment went viral, and Bolt insisted he wasn't pleased. He came back to blow away De Grasse in the final, by nearly a quarter second, but the champion suggested the extra energy didn't help in his futile quest to re-set his world record of 19.19.

Lesson learned, and since Bolt left the scene, the world has been looking for someone, anyone, to take his place in the marquee track events.

Italian sprinter Marcell Jacobs came from nowhere to win the 100, leaving De Grasse behind in what is usually considered his second-best distance.

And finally, De Grasse has cashed in. It's his first gold at a major event after amassing two silvers and six bronzes at Olympics and world championships since 2015.

"It's persistence," said Canadian decathlete Damian Warner, who hung out near the track to watch his teammate win.

"He's had to go against Usain Bolt, Yohan Blake, all these tough competitors. So it's not like he's just choking or losing in the final. He's losing to some really great athletes."

This time, he beat some — most notably, Lyles, who has been on a difficult road to the Tokyo Olympics. He has openly talked about his own mental-health issues and how the pandemic disrupted everything.

At one point, he looked like he might be heading for an attempt at a 100-200 double. But his 100 at Olympic trials was a mess, and his best race of the season was the 200 final in Eugene, Oregon.

Lyles made a mistake the night before in the semifinals, slowing down too far before the line, getting edged out for the two automatic spots, and being forced to wait to see if his time would earn him a qualifying spot.

It cost him in the final. Forced to start in Lane 3, where all the top competition races behind him, Lyles pushed out too quickly. He had the lead heading into the homestretch but had nothing more to give.

"Unfortunately, I couldn't see anybody and was running for my life," Lyles said.

Nope. De Grasse was doing the chasing. And catching. And, finally, winning. He's the first sprint gold medalist for Canada since Donovan Bailey won the 100 at the 1996 Atlanta Olympics.

Quite an accomplishment for a one-time point guard who got into track on a whim. On the bus in high school, he bumped into a friend, who challenged him to come out to the track. De Grasse thought he could beat his buddy, so he went out in his basketball shorts, started from a standing position and finished in 10.9.

Olympic bronze medalist Tony Sharpe was sitting in the stands that day, saw it and said, "Who is this guy?"