However, the same leeway has not been granted to the individual events in shooting, which will see 356 athletes from as many as 100 countries competing for glory in Tokyo 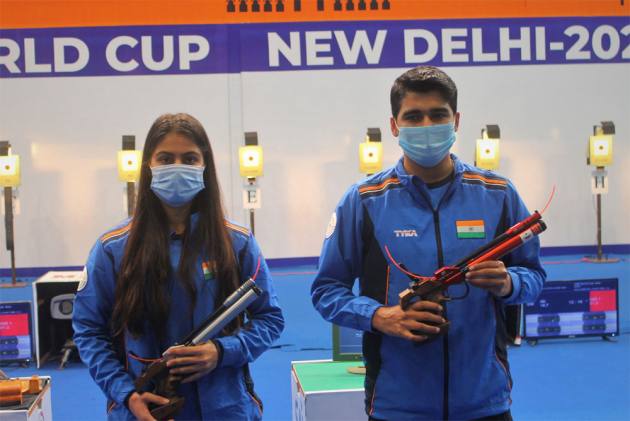 The International Olympic Committee (IOC) has approved replacement in the mixed team shooting events of the upcoming Tokyo Games if an athlete from a participating nation tests positive for COVID-19 just before the competition. (More Football News)

However, the same leeway has not been granted to the individual events in shooting, which will see 356 athletes from as many as 100 countries competing for glory in Tokyo, with the women's 10m air rifle and 10m air pistol events drawing maximum participants.

"For the mixed team event, in case an athlete can no longer take part in the event, but the NOC (National Olympic Committee) has another athlete on site, the NOC can replace an athlete team member," the IOC's Tokyo 2020 Sport-Specific Regulations (SSR) stated.

The newly introduced mixed team events in shooting has bolstered an already strong Indian team's chances of medals at the Games.

The sensational pair of Saurabh Chaudhary and Manu Bhaker will take aim for India in the mixed team air pistol event in Tokyo, with Yashaswini Singh Deswal and Abhishek Verma forming the other combination.

In the mixed team air rifle event, India will be represented by the duo of Divyansh Singh Panwar and Elavenil Valarivan, and they will have the combo of Deepak Kumar and Anjum Moudgil as the other team.

If one of these shooters contracts the dreaded virus before their events, the Indian contingent as well as the others will have the option of substituting the athlete, provided they have a replacement in place from the individual pistol or rifle events.

However, shooters not able to compete due to a COVID positive case in the individual events will be marked as 'Did Not Start' (DNS).

"In shooting, if an athlete/team is not able to compete due to COVID-19, they will not be disqualified and will be marked as DNS. There will be no change to the competition format or groupings.

"The events take place over one day with the exception of the shotgun events. However, all athletes compete on both days and therefore the results of the daily COVID-19 test will determine if an athlete can start otherwise the event will go ahead with one athlete less," the IOC said.

The Tokyo 2020 Sport-Specific Regulations (SSR) have been developed jointly by IOC and the international federations.

The SSR was developed to determine the impact of a confirmed positive COVID-19 case and its management in competition formats and structures.

As far as shooting is concerned, the National Rifle Association of India (NRAI), while selecting the Olympic squad in April, had named two reserves for each individual event, considering the uncertain global scenario with the pandemic. No reserve squad was kept in place for the mixed events.

These were decided upon on the basis of the IOC guidelines.

"The reserves in individuals events can only be included in the team until the departure for Tokyo. Once you are there, there will be no such scope," an NRAI official said.

The Olympics are scheduled to be held in the Japanese capital from July 23 to August 8, with the shooting events starting a day after the opening ceremony and covering the first 10 days of the extravaganza, which will be held without spectators owing to the pandemic.