Fiji clinched back-to-back Olympic gold medals with a 27-12 victory over New Zealand on Wednesday in the final at the Tokyo Games. 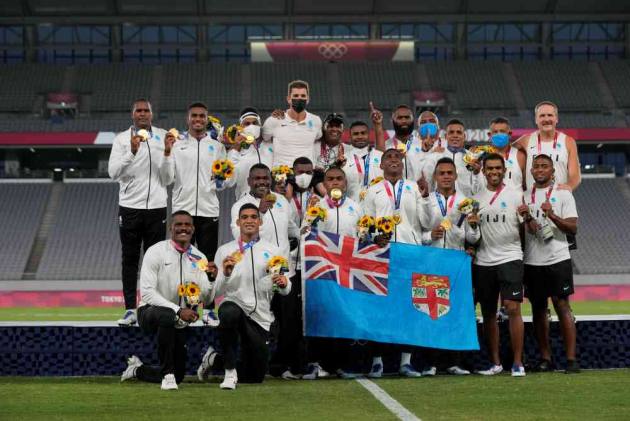 Jerry Tuwai is a two-time Olympic champion and his Fiji rugby sevens squad has given the people of their Pacific island nation something to celebrate during the COVID-19 pandemic. (MEDAL TALLY | DAY 7 SCHEDULE)

Fiji clinched back-to-back Olympic gold medals with a 27-12 victory over New Zealand on Wednesday in the final at the Tokyo Games.

The government declared a national holiday and the central bank printed $7 notes to commemorate Fiji's gold medal — the country's first Olympic medal of any kind — when rugby sevens made its Olympic debut in 2016.

It's going to be hard to top that.

There will be time to think about, though. Tuwai's squad has been on the road in a bio-secure bubble for several months, and still has to quarantine when it gets back to Fiji.

It's a small price to pay for gold. The Fijian squad started singing when its anthem played on the podium. With the medals around their necks, their song turned to hymns.

Rugby is the national sport in both Pacific countries. But rugby sevens means more to the Fijians, who develop their trademark instinctive passes and one-hand unloads on the beaches and villages across the islands.

The silver was an improvement for the New Zealand men’s team after it missed the podium when rugby sevens made its Olympic debut at Rio de Janeiro in 2016.

All the rugby sevens medals at the Tokyo Games went to the Southern Hemisphere, with Argentina beating 2016 finalist Britain 17-12 for the bronze. South Africa, the bronze medalist in Rio, beat the United States 28-7 in the playoff for fifth place. Australia beat Canada to finish seventh.

The Fijians were always in front in the final, just as they were in Rio, scoring three first-half tries to lead 19-12 at the break. When Asaeli Tuivuaka raced over to score in the right corner with about two minutes remaining, another title was assured.

Meli Derenalagi opened the scoring in the 2nd minute in an eerily quiet stadium, unlike the raucous atmosphere in Rio five years ago. Fans are banned because of the pandemic, but there were shouts and yells of encouragement from the bench.

Sireli Maqala made it 12-0 soon after, pouncing on a loose ball that Andrew Knewstubb was unable to ground in-goal.

The Fijians were playing with control but conceded after the halftime siren sounded, with Sione Molia stepping through some tired dense to touch down for New Zealand and make it 19-12 at the break.

The New Zealanders stayed within touching distance until Tuivuaka's try put the result beyond doubt.

The classification for 9th-12th was completed in the morning session, with Kenya beating Ireland 22-0 for 9th and 2016 semifinalist Japan finally getting a win to finish off a disappointing campaign at the Tokyo Games — albeit to avoid last place with a 31-19 comeback over arch rival South Korea.

Five years after finishing fourth in Rio, Japan kicked off the Olympic tournament with a narrow loss to Fiji. Winger Lote Tuqiri said the ban on spectators because of the COVID-19 pandemic and the competition draw — Day 1 games against Fiji and Britain — cost the host team.

"Seems like we played our final in the first game,” he said. (AP)