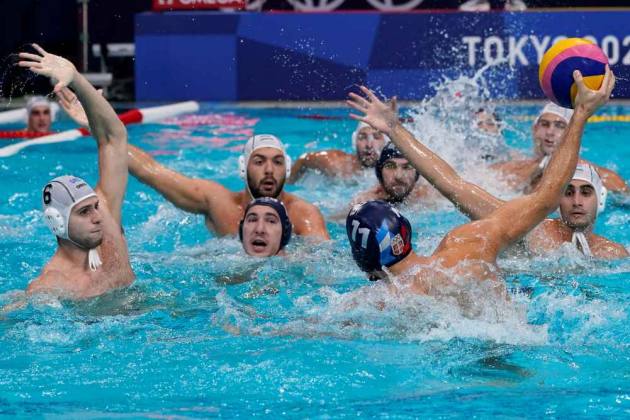 Filip Filipovic and Serbia followed a familiar formula all the way to another gold medal at the Olympics. (MEDAL TALLY | GALLERY)

Serbia became the first country to repeat as Olympic champion since Hungary won three in a row from 2000 to 2008. It earned its fourth medal in its fourth appearance in the Olympics’ oldest team sport.

Greece also matched the country’s best result in a team sport at the Olympics, joining a silver medal in women’s water polo at the Athens Games.

It was a surprising run for Fountoulis and company, and the Greeks pushed Filipovic and the mighty Serbs deep into the fourth before fading. The teams exchanged hugs in the water when it was over.

Serbia learned some valuable lessons while winning bronze medals in 2008 and 2012, namely how to pace itself during the grueling tournament. It finished fourth in its group at the Rio de Janeiro Games, and then muscled its way to its first Olympic title.

Five years later, it was more of the same.

Serbia split its first four games in Tokyo and finished third in Group B, but it raised its game to another level when the quarterfinals rolled around. Filipovic’s tiebreaking goal with 26 seconds left put Serbia back in the final with a dramatic 10-9 victory over Spain on Friday.

Viktor Nagy led Hungary to the bronze medal in men's water polo in his last game, making eight saves in a 9-5 victory over Spain.

Marton Vamos scored two goals as Hungary rebounded from a disappointing 9-6 loss to Greece in the semifinals.

Hungary is the winningest program in men’s water polo with nine golds, but the bronze in Tokyo was its first medal since its run of three straight Olympic titles from 2000 to 2008. It finished fifth in London and Rio de Janeiro. (AP)