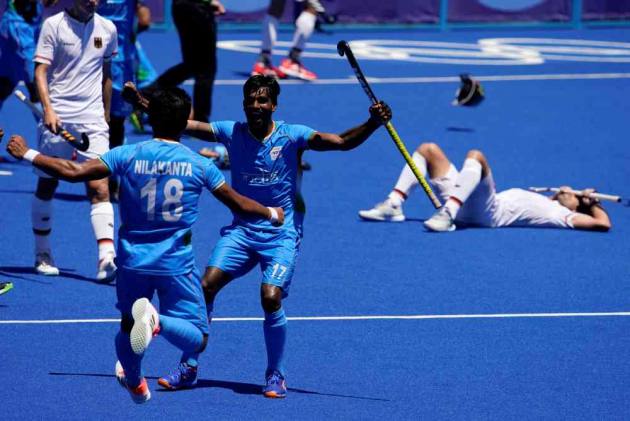 Indian hockey team's astonishing 5-4 comeback win against Germany to clinch a historic Olympic bronze medal on Thursday received praise from former Pakistan players who felt that the feat will give a boost to the game in the sub-continent. Highlights | Tokyo Olympics | Full Schedule | Sports News

A resolute India rewrote history by claiming an Olympic medal after 41 years, defeating a plucky Germany to win the bronze in an edge-of-the-seat play-off match of the Tokyo Games on Thursday.

Pakistan hockey legend Hasan Sardar lauded the Indian team for fighting back after trailing by two goals in a fast paced game.

"They (Indians) didn’t wilt under pressure, they wanted the bronze medal and that is a good sign for hockey in the subcontinent,”
said Sardar, who till last year remained coach of Pakistan national team.

Former Olympian Waseem Feroze said he was happy to see a sub-continental team win an Olympic medal after such a long time.

“What is good is that India is mixing European and Asian styles to produce good results and they played a very proactive game today against Germany. They had a lot of thrust today and they have a good young forward line.”

Feroze hoped that the Indian women's team would also add a bronze medal in their match against Great Britain on Friday.

Another former Olympian and current secretary of Pakistan Hockey Federation (PHF), Asif Bajwa said he was not surprised by India winning the bronze medal as they are ranked among the top five in world hockey.

"They (India) have the best facilities and coaches but it is after a long time they have done well in the Olympics which is a good boost for the sport in Asia,” he said.

Bajwa hoped that India would act on proposals from PHF to revive bilateral series at neutral venues, which have not been held for many years.

“Playing against India served two purposes, one that it allowed the PHF to generate good revenues and also gave our players international exposure and a chance to improve game standards,” Bajwa said.

“I firmly believe that field hockey has also taken a back seat to cricket in the subcontinent because of no Pakistan India matches.”

Former Olympian Samiullah said, "It (India's bronze medal win) shows India and Pakistan can compete against top European nations and Australia and do well despite the way the sport has changed and new rules have been enacted.

"We still have hockey talent in Pakistan. Unfortunately, we are missing a proper structure from grassroot level and incentives for players is minimal. The government is also reluctant to give more funds to the PHF due to past issues.”

Another former Olympian and ex secretary of the PHF, Rana Mujahid said one cannot compare Pakistan hockey with India.

“How can you compare? I remember when I was secretary with much difficulty we managed to get funds from government and private sponsors, individuals just to send the national team for international competitions.

"In Indian hockey there is no shortage of funds and competition exposure for their team.”

Pakistan has not been able to qualify for the last two Olympic Games and has faced acute fund shortage in the last three years totally depending on grants from the government.

At one stage, the PHF didn’t have enough funds in its account to pay salaries of its staffers.