Schauffele became the first American to win the gold since 1900, while South African-born Slovakian Rory Sabbatini won the silver with a record-breaking 10-under 61 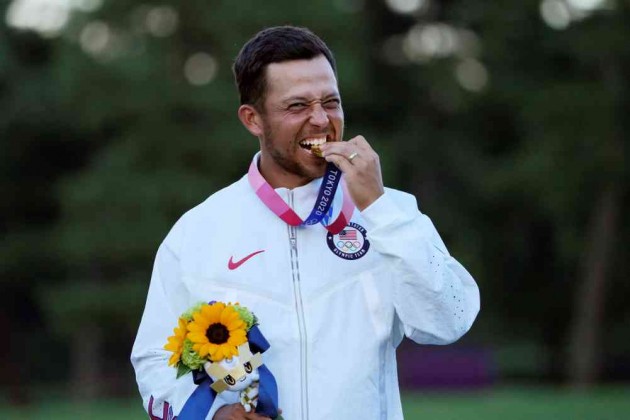 Xander Schauffele became the first American to win the gold, while Indian golfer Anirban Lahiri ended his second Olympic campaign at Tied 42nd after carding a one-over 72 in the fourth and final round in Tokyo on Sunday. Tokyo Olympics | Full Schedule | Sports News

The other Indian in fray, Udayan Mane, who got into the field later as a result of some withdrawals, also shot one-over 72 in the final round after earlier rounds of 76-69-70. He was 3-over for the week and ended 56th.

Lahiri started the week with a bogey on the first day but ended it with a birdie.

On the final day, he had three birdies and four bogeys.

Mane had four birdies, one on the front nine and three on the back nine, besides five bogeys.

For more than an hour after gold and silver had been decided, the fight for bronze went on with a seven-man play-off that brought out the beauty of golf at the Olympics.

Add to them Sebastian Munoz of Colombia, Mito Perera of Chile, Paul Casey of Great Britain and CT Pan of Chinese Taipei, and it underlined the global appeal of golf.

From that lot, Pan won the bronze, seven years after he won two Asian Games gold medals in golf in 2014.

Schauffele, 27, playing in front of what was one of the largest crowds attending an Olympic win this year, claimed the gold in a country, where his grandparents from his mother's side still reside.

Xander sunk a 4-foot par putt for a 4-under 67 for his first tournament victory in two and a half years after several close calls.

His father and coach, Stefan Schauffele was once a Olympic decathlon hopeful till a drunk driver hit him and left him blind in one eye in 1986. The elder Schauffele was then 20.

Xander Schauffele became the first American golfer to win gold since 1900 and it was not contested from 1908 to 2012.

Golf returned to Olympics in 2016 and Justin Rose won gold. Rose did not qualify for Great Britain this time.

While Schauffele won gold, Rory Sabbatini set a new record with 10-under 61 and jumped to 17-under to set the target, which the American overtook and won by one at 18-under.

Sabbatini, who won the 2003 World Cup as a South African but now lives in the US, won the silver under the Slovakian flag.