It was expected to be a tricky tie for India but they punched above their weight to simply demolish USA's challenge in front of a partisan crowd at the Kalinga Stadium. Ranked ninth in the world, India now need to defend their four-goal advantage in Saturday's second and final-leg to seal their 2020 Tokyo Olympics ticket 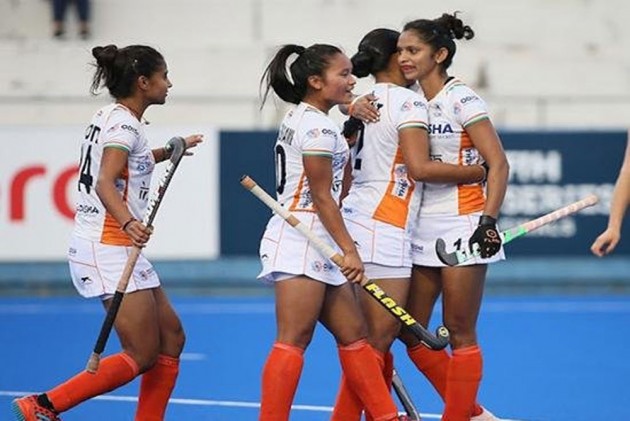 Indian women's hockey team took giant leap towards Olympic qualification with a near-flawless performance to hammer USA 5-1 in the first-leg of the two-match FIH Qualifier at Bhubaneswar on Friday.

It was expected to be a tricky tie for the hosts but the women punched above their weight to simply demolish USA's challenge in front of a partisan crowd at the Kalinga Stadium.

USA's consolation goal came from a penalty stroke converted by Erin Matson in the 54th minute.

Ranked ninth in the world, India now need to defend their four-goal advantage in Saturday's second and final-leg to seal their Tokyo 2020 ticket.

The Indians exerted early pressure on the Americans but failed to create any clear cut opportunities.

USA got their act together with passage of time and had a clear sight of goal in the seventh minute but Alyssa Parker shot wide from top right of the striking circle with only Indian goalkeeper Savita to beat.

After a rather action-less opening quarter, the match livened up in the next 15 minutes.

India got their first scoring chance a minute into the second quarter but Sharmila Devi failed, in the far post, to get her stick on to a cross from Lalremsiami.

Chances came thick and fast in the second quarter as four minutes later, Indian goalkeeper Savita pulled off a fine save to deny Lauren Moyer's reverse shot from close range.

USA counter-attacked and secured their opening penalty corner in the very next minute but skipper Kathleen Sharkey shot wide. Soon, USA got their second penalty corner but once again the visitors wasted the opportunity.

A minute later, Sushila Chanu Pukhrambam's shot from top of the box was saved by the American goalie but from the rebound India secured their second penalty corner, which resulted in another.

Sushila failed to stop the push but from the ensuing move, an unmarked Lilima, stationed at the far post, tapped it in to break the deadlock.

The late goal in the second quarter seemed to have worked wonders for the Indian girls as they completely dominated the third quarter, pumping in two more goals to take a commanding 3-0 lead.

India earned two more penalty corners in a span of four minutes but on both occasion Gurjit Kaur was denied by USA goalie Bing.

But kept up the pressure on the American defence and soon doubled their lead in the 40th minute when Sharmila deflected in from close range after she was set up by a move from Navneet Kaur and Lilima.

Within 30 second of the start of the fourth quarter, India extended their lead from a counter-attack when Navneet collected a pass from Salima Tete inside the 'D' before slamming the ball into the bottom right corner.

India rounded off the tally in the 51st minute when Gurjit scored from the spot after they were awarded a penalty stroke for Margaux Paolino's foul inside the circle.

USA pulled one back soon from a similar scenario, a penalty stroke converted by Matson.