The skipper said self-belief was key to success as India made the last four round of the Olympics for the first time after the 1972 Munich Games. 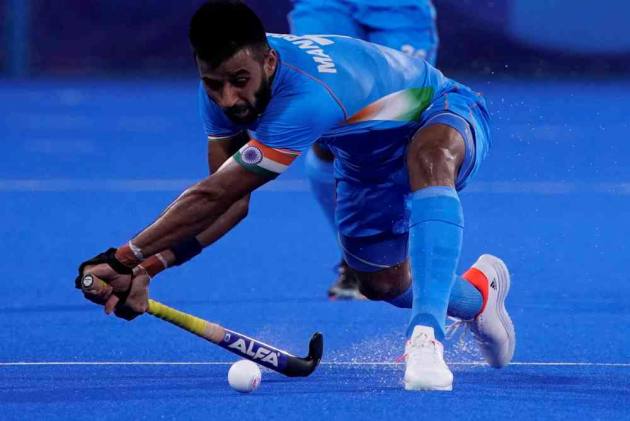 The Indian men's hockey team captain Manpreet Singh on Sunday said his players "almost killed themselves" in their efforts to secure an Olympic semifinal berth after a gap of 49 years, heaping praise on their commitment during the 3-1 quarterfinal win over Great Britain in Tokyo. Tokyo Olympics | Full Schedule | Sports News

The skipper said self-belief was key to success as India made the last four round of the Olympics for the first time after the 1972 Munich Games.

"It was believing. Everyone believing in themselves and that was the key today, everyone gave their 100 per cent today and they were dying and almost killed themselves on the field," Manpreet said.

India's last of the eight Olympic gold medals came way back in 1980 Moscow Games but there were no semifinals in that edition as only six teams participated in the event.

For a country that gave the world stalwarts like Major Dhyan Chand and Balbir Singh Senior among others, it has been painful to watch the hockey teams' Olympic debacles before this edition.

In the Munich Games semifinals, India had lost 0-2 to arch-rivals Pakistan.

Elated with the outcome of Sunday's match, Manpreet cautioned his teammates against early celebrations, saying the "business hasn't finished yet."

"We are so happy because after a long time we are reaching a semifinal. Still, the business hasn't finished yet. Still we have two more games so we need to focus, we need to have our feet on the ground and we need to focus on the next match," he said.

Great Britain's lone goal was scored by Sam Ward from a penalty corner in the 45th minute.

India will take on world champions Belgium in the semifinal on Tuesday.

"Everyone played very well. We scored three outstanding goals, the strikers made a good opportunity and the whole team played really well."

Experienced India goalkeeper PR Sreejesh pulled off some fine saves on Monday to play his part in the win, and Manpreet was full of praise for the stalwart.

"Unbelievable. You can see he (Sreejesh) always gives us life. That's why we call him 'The Wall'. It's always outstanding," he said.

Manpreet received a yellow card just six minutes from the final hooter for an unnecessary tackle, which not only gave Great Britain a penalty corner but reduced India to 10 men for five minutes.

Asked what was going on in his head after receiving the card, he said: "I was praying all of that time. I was closing my eyes and I believe in my team.

"I knew that my team would give me 100 per cent and they would save me today because I got the (yellow) card, but they gave their 100 per cent for me and I say thank you to all of my teammates."

Sreejesh said there is plenty of room for improvements ahead of their last two crucial games in the Olympics.

Asked about his strong performance in front of the Indian goal, Sreejesh said: "That is my duty. I'm just doing my duty and being a senior-most player I know that every save gives these players more energy.

"You know that in these kind of intense matches the last quarter is going to be really tough for them, their legs are heavy, they are putting their 100 per cent, so one save gave them more energy to run harder," he said.