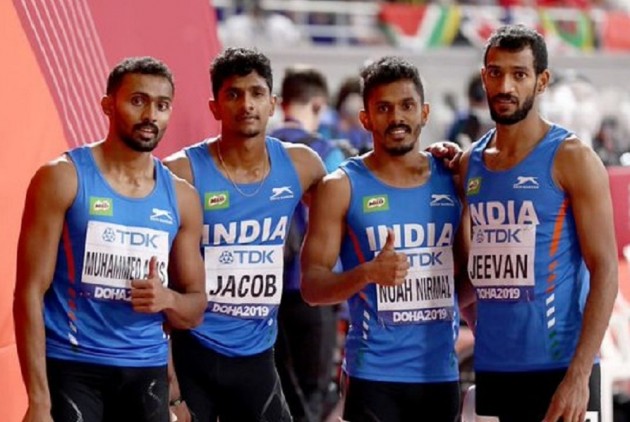 The Indian men's 4x400m relay team shattered the Asian record but failed to qualify for the finals while the race walkers produced disappointing performances to bring up the rear in the Olympics in Tokyo on Friday. Tokyo Olympics | Full Schedule | Sports News

The quartet of Muhammed Anas Yahiya, Tom Noah Nirmal, Rajiv Arokia and Amoj Jacob finished fourth in the second heat with a timing of 3:00.25sec.

They missed the eight-team final by a whisker as they ended at ninth spot overall.

The first three in each of the two heats and the next two fastest qualify for the final.

The earlier Asian record was in the name of Qatar which had clocked 3:00.56 while winning the gold in the 2018 Asian Games.

Jacob, who ran the last leg, was the best among the four Indian runners with 44.68 seconds as he overtook two rivals after the team was placed at sixth when he took the baton from Rajiv Arokia (44.84).

National record holder Yahiya understandably clocked the slowest (45.60) time as he had to run the longest distance after starting the race in lane number 2.

Earlier in the day, the race walkers failed to impress with below-par performances at Sapporo.

National record holder Priyanka Goswami was among the leading pack around the halfway mark but eventually finished 17th while compatriot Bhawna Jat ended at 32nd in the women's 20km race walk event.

In the men's 50km event, Gurpreet Singh pulled out after the 35km mark due to cramps under hot and humid conditions as the Indian race walkers ended their disappointing campaign.

The 25-year-old Priyanka clocked 1 hr 32 minutes 36 seconds, well outside her personal best of 1:28:45 which she had come up with during the National Open Race Walk Championships in February.

The event was held under hot and humid conditions.

Priyanka was in the leading pack from the beginning and was the front-runner when she crossed the 8km mark but she eventually dropped down.

Bhawna, on the other hand, failed to keep pace with the leading pack and was behind from the beginning to eventually end at 32nd with a time of 1:37:38.

In the morning, the 37-year-old Gurpreet, one of the lowest ranked athletes in the event, was 51st at the 35km mark with a time of 2 hr 55 minutes and 19 seconds but dropped out just after that.

He had slowed down considerably and was seen sitting on the sidelines after the 35km mark, being helped by the medical team of the race but did not seem in much trouble.

Gurpreet has a personal best of 3:59:42 which he had clocked while winning gold during the National Open Race Walk Championships in February.

The humidity was at a very high 80 per cent.

Fifty nine athletes started but 12 either did not finish or were disqualified.