In reality, the beds were made of cardboard for environmental-friendliness. After the Olympic Games, these beds will be recycled into paper products 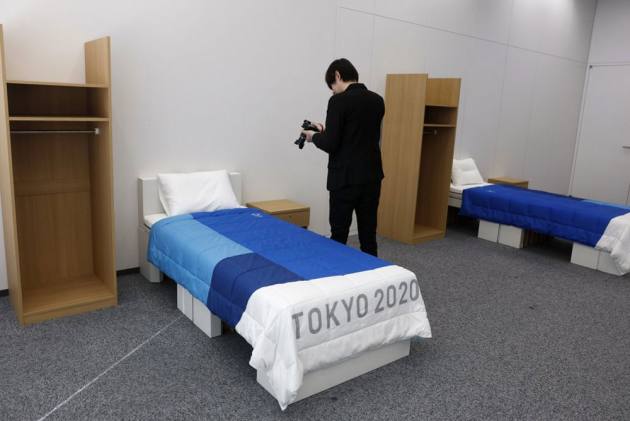 Fact first. Athletes competing in the Tokyo Olympics 2020 in 2021 will be sleeping on beds made of cardboard. And the athletes are strictly told to observe 'social distance'. Meaning no sex at the Olympic Village. (More Sports News)

Then, the fiction. Cardboard beds are 'anti-sex'? Since American athlete Paul Chelimo shared a hilarious Twitter post, saying "Beds will be able to withstand the weight of a single person to avoid situations beyond sports," many have taken to social media sites to share their expert opinions on the so-called 'anti-sex' beds.

Beds to be installed in Tokyo Olympic Village will be made of cardboard, this is aimed at avoiding intimacy among athletes

Beds will be able to withstand the weight of a single person to avoid situations beyond sports.

What if we kissed on the anti-sex Olympic beds? pic.twitter.com/Tz7rXhJhaW

I think they should have organized them better. For example avoiding to concentrate all the athlete in a single village for 14 days but distribute all the competitions throughout the year. Maybe this would have helped instead of the antisex bed ðÂÂÂÂÂÂÂÂÂ

In reality, the beds were made of cardboard for environmental-friendliness. After the Games, the beds will be recycled into paper products. And these cardboard beds can actually stand up to 200 kgs, according to Takashi Kitajima, the general manager of the Athletes Village.

"Those beds can stand up to 200 kilograms," explained Kitajima. "They are stronger than wooden beds. Of course, wood and cardboard would each break if you jumped on them."

As many users have shared, those athletes who still wish to get 'physical' can always use the floor.

They only need to put the mattress on the floor and it becomes basically a futon, something tons of Japanese use to sleep.

This idea of cardboard antisex beds is so retarded in so many levels.

What galaxybrain thought taking a Japanese futon FLOOR MATTRESS setting on flimsy cardboard boxes was 1:going to stop th most athletic people on earth from boinking & 2:keep them from putting it on the fucking floor...

10,000ðÂÂÂÂÂÂ´ they all deliberately break them in the first hour pic.twitter.com/yFjKRobXvw

By the way, mattresses and pillows are not made of cardboard. So thus the condoms.

The International Olympic Committee (IOC) will provide about 14 condoms to each of the athletes arriving in the capital city of Japan for the world's greatest sporting spectacle. But the IOC doesn't want athletes to practice sex, understandably so.

In fact, it has released a 33-page playbook urging athletes to socially distance and "avoid physical contact, including hugs and handshakes."