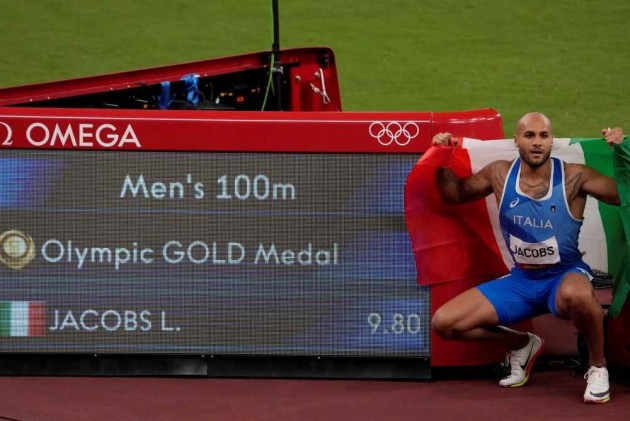 Even in a race with no clear favorites, Jacobs was a surprise. He topped America's Fred Kerley and Canada's Andre DeGrasse to take the spot held for the past 13 years by the now-retired Usain Bolt.

Jacobs' victory came on quite a night for Italy. Only a few minutes before his stunner, countryman Gianmarco Tamberi tied Qatari high jumper Mutaz Essa Barshim for gold in the high jump. Tamberi, writhing on the ground, kicking his feet up in jubilation needed someone to hug – and found him when Jacobs, of all people, crossed the line first.

Earlier, Yulimar Rojas of Venezuela broke a 26-year-old world record in the triple jump with a leap of 51 feet, 5 inches (15.67 meters).

The Jacobs victory left everyone outside Italy – and maybe some in the country, as well – letting out a collective “Who?”

He was born in El Paso, Texas – the son of an American father and an Italian mother.

He moved to Italy as a young boy when the U.S. military transferred his dad to South Korea. He was a long-jump specialist for years, and his biggest major success was an indoor 60-meter win at European champions.

Now, he's on the same list with Bolt — an Olympic sprint champion.

His path was made that much easier when American Trayvon Bromell, who came into Tokyo with the world's leading time and as the odds-on favorite, didn't even make the 100-meter final.

Bromell ran his semifinal heat in 9.996 seconds to finish third, and said “I'm not really sure what I could've done better, but the race went the way the race went.”

The day's other gold medal went to Gong Lijao of China, who bested American Raven Saunders of the United States. Saunders, who is openly gay and wears an “Incredible Hulk” mask when she competes, closed out the medals ceremony by lifting her arms above her head and forming an “X” with her wrists.

“It's the intersection of where all people who are oppressed meet,” she explained.