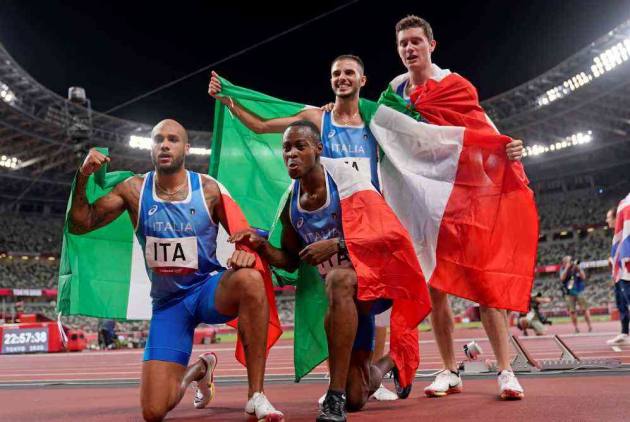 Marcell Jacobs backed up his shocking 100-meter victory with another totally unexpected gold for Italy in the 4x100-meter relay at the Olympics. Tokyo Olympics | Full Schedule | Sports News

That was one surprise on Friday.

Another came when Sifan Hassan abandoned her tried and tested race tactics and faded for bronze in the 1,500 meters — the first race out of five at these Games that she hasn't won. Faith Kipyegon of Kenya successfully defended her Olympic title in a Games record after overtaking Hassan.

One thing that wasn't a surprise: The Jamaican women's 4x100-meter team — made up of the three fastest women in the world at these Games — went blazing away for gold.

Jacobs, the newly-crowned Olympic champion in the 100, didn't even run the anchor leg for Italy. That was left to Filippo Tortu. He went toe-to-toe with Nethaneel Mitchell-Blake of Britain down the home straight and came out on top to give Jacobs his second gold of the Games.

Hassan was also searching for a second title in Tokyo.

But the dynamic Dutch distance runner abandoned the race plan that has served her so well, ending her dream of a rare distance-running triple.

Kipyegon breezed past Hassan to win in that in a Games record of 3 minutes, 54.11 seconds. Laura Muir of Britain also pushed ahead of Hassan to win the silver medal.

Hassan clung on for a bronze medal as she tired badly on the home stretch. But while that wasn't what anyone expected after her blistering form at these Olympics before Friday, it certainly shouldn't be seen as a failure.

Hassan already has a gold in the 5,000 meters in Tokyo and can complete a rare set of three distance-running medals at the same Games when she goes in the 10,000-meter final on Saturday.

That'll be her sixth race in eight days.

Hassan still draped the Netherlands flag over her shoulders at the end of the 1,500.

No one expected Hassan to race to the front of the field on the first lap — which might explain why she did it.

For all four of her previous races at the Olympic Stadium — both in the 5,000 and 1,500 — she'd settled in at the back and bided her time before letting loose a blistering final lap to win. She even came from the back to win her 1,500 heat after tripping over another runner and falling, making an astonishing recovery.

Surprised, maybe, at first, the others quickly adjusted to Hassan's change of plan and Kipyegon was the one biding her time. The Kenyan made her move off Hassan's shoulder near the final bend and Muir also kicked past Hassan.

For the first time in a week, Hassan's hectic schedule appeared to catch up with her.

Felix was delighted with her bronze in the 400 meters behind Shaunae Miller-Uibo of the Bahamas and Marileidy Paulino of the Dominican Republic.

Miller-Uibo got over her failure in the 200-meter final in Tokyo to return to her best event and retain the title she won in 2016. She won dominantly in 48.36 seconds.

Felix squeezed into bronze for medal No. 10. That broke a tie with Jamaican runner Merlene Ottey and matched Lewis.

Joshua Cheptegei of Uganda was also glad he decided to make the trip to Japan. Cheptegei said he had been considering skipping these Olympics as he didn't feel his form was there.

He ended up with gold in the 5,000 meters to go with the silver medal he won in the 10,000 meters on the opening day day of the track and field competition. (AP)