Camacho-Quinn finished in 12.37 seconds for a .15 second win — a blowout in such a short race — over the world-record holder, Keni Harrison. Jamaica's Megan Tapper finished third 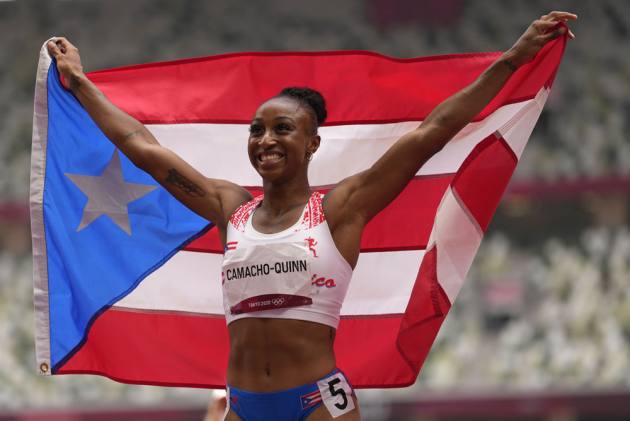 Jasmine Camacho-Quinn of Puerto Rico powered ahead of American Keni Harrison in the women's 100-meter hurdles Monday, springing an upset and keeping the United States out of the win column at the Olympic track meet for yet another session.

Camacho-Quinn finished in 12.37 seconds for a .15 second win — a blowout in such a short race — over the world-record holder, Harrison. Jamaica's Megan Tapper finished third.

Puerto Rico, a U.S. territory that competes under its own flag at the Olympics, has one more track gold medal than the deepest team at the Games as the meet approaches its halfway point.

Camacho-Quinn's best time coming into the Olympics was 12.38. She ran a 12.26 in the semifinals that ranks fourth on the all-time list.

Harrison is first on that all-time list. Her world record is 12.2.

The buildup to that mark in 2016 played out awkwardly. She finished fourth at Olympic trials and was denied the trip to Rio de Janeiro. A few weeks later, she traveled to London and set the world record, then returned home to watch the Americans sweep the Olympic medals.

None of those Americans, Brianna Rollins-McNeal, Nia Ali or Kristi Castlin, were in Tokyo, but this felt like an event for the U.S. to finally break its string of no gold medals.

They had won the three of the last four women's 100-meter hurdles at the Games, including the 2008 shocker by Dawn Harper after all the build-up had been pointed toward Lolo Jones.

That spoke to the depth of American hurdles.

Turns out, Puerto Rico is tapping into that talent, as well. Camacho-Jones, whose brother, Robert, plays in the NFL, was born in South Carolina and went to college at Kentucky. She was eligible to run for Puerto Rico because that's where her mom is from.