The Olympic organizing committee said that it will hold the Osaka leg of the Olympic torch run, scheduled for April 13-14, at the 1970 Osaka Expo commemorative park 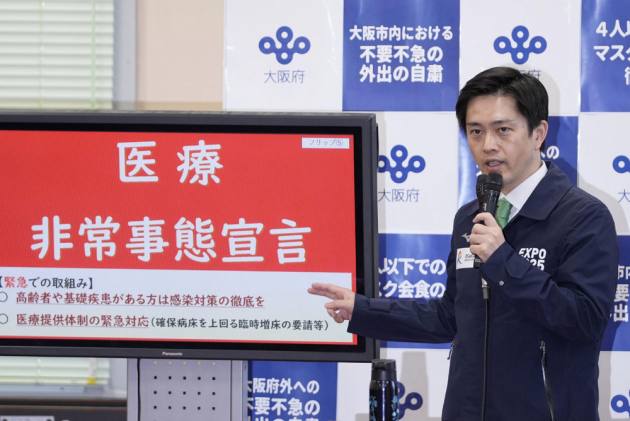 Japan's Osaka prefecture issued a special warning Wednesday that a rapid surge in coronavirus cases is placing medical systems in the region at the verge of collapse and requested the cancellation of the Olympic torch relay along all public roads in the prefecture. (More Sports News)

Yoshimura, who previously asked for a cancellation of the torch relay only in Osaka city, said all segments on public roads should be canceled. The Olympic organizing committee said later Wednesday that it will hold the Osaka leg of the Olympic torch run, scheduled for April 13-14, at the 1970 Osaka Expo commemorative park.

The Tokyo Olympics are to start in just over three months with Japan's vaccination drive still in its initial stages.

Experts say more contagious new variants of the virus are becoming more common and are urging health officials to respond quickly to prevent an explosive increase with only a fraction of the people inoculated.

"Medical systems are on the verge of collapse," Yoshimura said at a news conference. He attributed the rapid spike in infections to a new variant of the virus.

"Obviously it spreads more rapidly and it is more contagious,(asterisk) he said. About 70% of hospital beds available in Osaka are now occupied, the threshold for declaring a "medical emergency," officials said.

Osaka's neighboring prefecture of Hyogo is also facing an upsurge and has imposed special virus measures in four cities beginning Monday, along with Sendai, a city in the northern prefecture of Miyagi.

Infections also have surged elsewhere in the western region, which experts say may require additional virus protection measures and stay-home requests, possibly leading to the cancellation of more torch events, a further setback for the Olympics.

Yoshimura said he plans to issue an emergency request for residents of Osaka prefecture to avoid nonessential outings beginning Thursday.

Still, experts say Tokyo is on a rebound, with people going out in droves, commuting to work and dining and partying at restaurants and bars.

"A new wave of infections has begun. There is no doubt about that," said Ryuji Wakita, director-general of the National Institute of Infectious Diseases who heads a government COVID-19 advisory board.