Osaka was knocked out from the tennis tournament, while Biles pulled out of the gymnastics team competition 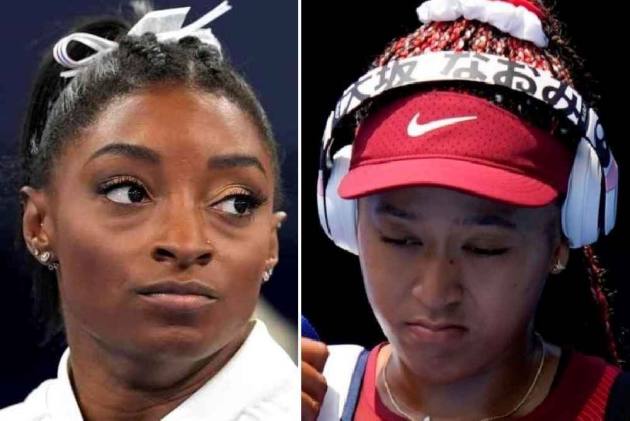 Simone Biles came into the Olympics as perhaps the biggest star of the Games. Naomi Osaka was such a big headline act that she was given the honor to light the Olympic flame in her native country. Tokyo Olympics | Full Schedule | Sports News

In a matter of just hours on Tuesday, Osaka was knocked out early from the Olympic tennis tournament and Biles pulled out of the gymnastics team competition when she realized following a shaky vault she wasn't in the right headspace to compete.

“I didn't want to go into any of the other events second-guessing myself,” Biles said.

“So I thought it would be better if I took a step back and let these girls go out there and do their job.”

Biles is scheduled to defend her Olympic title in the all-around final on Thursday. She also qualified for all four event finals later in the Games. Whether she will get that opportunity remains to be seen.

The team representing the Russia Olympic Committee surged past the short-handed U.S. to the top of the podium, posting a score of 169.258 to win the country's first Olympic team gold in nearly 30 years.

The Americans hung on for silver and Great Britain won bronze.

Osaka, who was born in Japan and grew up in the United States, struggled with her usually reliable groundstrokes and lost 6-1, 6-4 in the third round to former French Open finalist Marketa Vondrousova of the Czech Republic

“I definitely feel like there was a lot of pressure for this,” Osaka said.

“I think it's maybe because I haven't played in the Olympics before and for the first year (it) was a bit much. I think I'm glad with how I played, with taking that break that I had.”

Japan won its second straight Olympic softball gold medal, beating the United States 2-0 in an emotional repeat of their 2008 victory in Beijing that again left the Americans in tears.

Yukiko Ueno took a one-hitter into the sixth inning five days after her 39th birthday, and Japan snuffed out an American rally attempt with an acrobatic double play in the sixth inning.

No. 9 batter Mana Atsumi had a run-scoring infield hit in the fourth inning and Yamato Fujita lined an RBI single off Monica Abbott in the fifth in building a 2-0 lead.

“I was definitely racing for a medal. I knew I had it in me,” said Jacoby, who hails from the tiny town of Seward, which has a population of 2,733.

“I wasn't really expecting a gold medal, so when I looked up and saw the scoreboard it was insane.”

Only a handful of Alaska swimmers had even qualified for the U.S. Olympic trials. Jacoby was the first to ever make the team.

The streak of 12 straight gold medals for the U.S. men in the individual backstroke ended when a pair of Russians beat out defending Olympic champion Ryan Murphy in the 100-meter race.

Evgeny Rylov won the gold medal in 51.98 and teammate Kliment Kolesnikov took the silver in 52.00. Murphy settled for the bronze in 52.19.

It was the first backstroke defeat for the U.S. men at the Olympics since the 1992 Barcelona Games.

They won 12 straight golds over the past six Olympics, including Murphy's sweep of the 100 and 200 back at the 2016 Rio de Janeiro Games.

“Winning an Olympic gold medal means you're the best in the world,” Murphy said.

“Being third in the world is no slouch.”

The U.S. women's basketball team opened play with an 81-72 win over Nigeria that extended the Americans' win streak at the Olympics to 50 games.

A'ja Wilson scored 19 points and grabbed 13 rebounds in her debut.

The U.S. came to Tokyo coming off two rare exhibition losses in Las Vegas earlier this month. The Americans also beat Nigeria by 31 points in that game.

This game was much closer and marked the first time that a team had come within single digits of the U.S. since Russia lost by four points in the semifinals of 2004 Athens Games.

The United States made it through to the quarterfinals of the women's Olympic soccer competition after a 0-0 draw with Australia.

The Americans are looking to win a fifth Olympic gold medal in Tokyo. They are also vying to become the first team to win at the Olympics following a World Cup title.

Flora Duffy has won the Olympic women's triathlon, earning Bermuda's first gold medal ever and first medal of any kind since 1976.

Duffy is a two-time former world triathlon series champion. She's competing in her fourth Olympics and is one of just two athletes representing Bermuda in Tokyo.

The start of the race was delayed 15 minutes because of storm conditions around Tokyo Bay. Duffy pumped her arms over her head as she finished the swimming, cycling and running course in 1 hour, 55:36 minutes.

The expected Olympic showdown between the top two women's volleyball teams in the world turned out to be a one-sided affair.

The U.S. women swept defending gold medalist China 29-27, 25-22, 25-21 in a pool-play match that left the Americans at the top of Pool B and the Chinese seeking to win their first set of the tournament after two straight sweeps to open the Games. (AP)