Russia— barred at the Olympics from using its name, flag or anthem— swept the gymnastics team gold medals 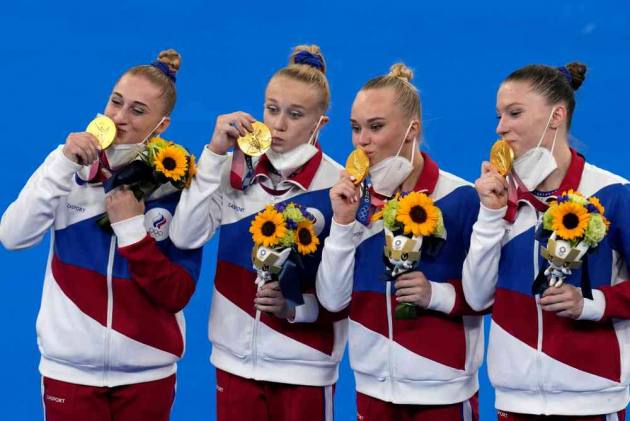 Angelina Melnikova, a celebrated gymnast from Russia, was gliding around the parallel bars when breaking news started rocketing around the world: her competitor, American superstar Simone Biles, was scratched from the competition.  Tokyo Olympics | Full Schedule | Sports News

Melnikova stuck the landing. She clenched her fists near her heart.

They weren't yet halfway through one of the most anticipated events of the Olympic Games, and the result had become a near certainty: the team from Russia would soon dethrone the Americans, who just days before seemed unbeatable.

In the end, they beat the Americans by 3.5 points, a significant margin in the sport.

It came just a day after the Russian men claimed the same victory in the team finals.

The country — barred at the Olympics from using its name, flag or anthem over a systemic doping scandal — swept the gymnastics team gold medals, among the most coveted at the Summer Games.

The women hung gold medals around each other's necks, and the Russian composer Tchaikovsky's Piano Concerto No. 1 played.

It was the first time either Russian team won gold at the Olympics since shortly after the fall of the Soviet Union.

Both the men and women under the post-Soviet banner of "Unified Team" won in 1992, but faltered in the decades after.

Though the history books may mark Tuesday's victory with an asterisk due to Biles' early withdrawal, the Russians' dazzling performance is the result of a concerted transformation since they finished a distant second to the American team at the 2019 World Championship.

Their performance Tuesday wasn't perfect: two of them, back to back, fell off the balance beam. But they recovered and became the first team in 11 years to beat the Americans in any event.

The first sign that they could topple the American powerhouse came at qualifying Sunday.

The Americans wobbled while the Russians performed closed to perfectly. They were each so good that reigning European champion Viktoria Listunova will have to sit out the all-around finals this week because two of her teammates, including Melnikova, scored higher. (AP)