The Americans, ranked No. 1 in the world and the favorites to win gold in Tokyo, were riding a 44-match unbeaten streak heading into the match 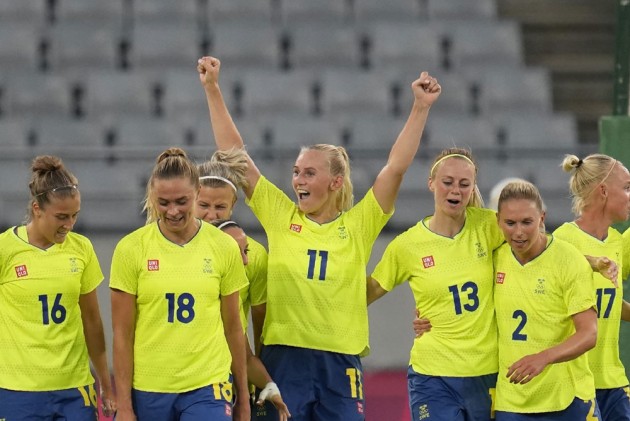 Stina Blackstenius scored a pair of goals and Sweden once again stunned the United States at the Olympics with a 3-0 victory Wednesday in the women's soccer tournament.

The Americans, ranked No. 1 in the world and the favorites to win gold in Tokyo, were riding a 44-match unbeaten streak heading into the match.

But Sweden, ranked No. 5, has been the U.S. team's nemesis of sorts in recent years. The Swedes bounced the Americans from the 2016 Rio de Janeiro Games in the quarterfinals, the earliest U.S. Olympic exit ever.

Then in April, Sweden played the United States to a 1-1 draw in Stockholm, which snapped a winning streak dating back to January 2019, when the Americans lost to France in the run-up to the World Cup.

Blackstenius' header into the far corner off a cross from Sofia Jakobsson in the 26th minute gave Sweden the first-half lead.

The United States came out stale, with its best chance of the opening half coming in the final moments when Rose Lavelle's shot hit the post. Coach Vlatko Andonovski made changes for the second half, subbing in Carli Lloyd for Alex Morgan and Julie Ertz for Sam Mewis.

But Blackstenius scored again in the 54th minute, beating goalkeeper Alyssa Naeher, as the Americans continued to struggle. Lina Hurtig then scored in the 72nd.

The loss was the first for the United States under Andonovski, who took over when former coach Jill Ellis stepped down following the team's World Cup victory in France.

The Swedes were without Magda Eriksson because of injury. The team said she has been training, but because of the compact schedule of the tournament she was held out of the opener.

Tokyo is Sweden’s seventh Olympics. After eliminating the Americans on penalties in the quarterfinals five years ago, the Swedes went on to win the silver medal, losing to Germany 2-1 in the final.

The United States has four Olympic gold medals, more than any other nation. The team is vying to become the first to win Olympic gold following a World Cup title.

Sweden now leads Group G heading into Saturday's game against Australia in Saitama, while the United States faces New Zealand. The top two teams in the group advance the knockout round.