Asian Games may have the presence of continental powerhouses like China, Korea and Japan but the Olympics are a different ball game altogether 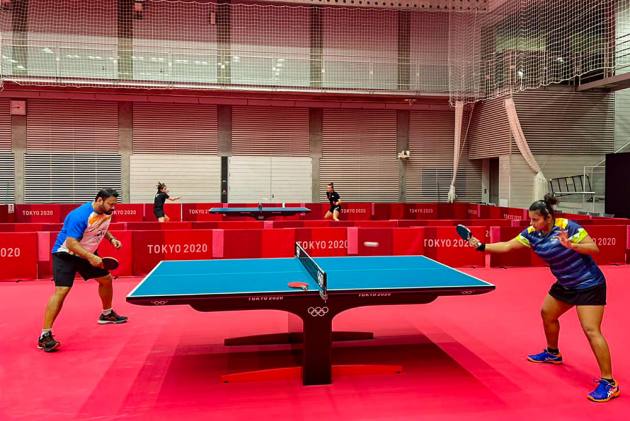 The Indian table tennis contingent produced an unthinkable performance at the Asian Games, considered as "mini-Olympics" by the players. Three years down the line, can they pull off another miracle at the Tokyo Games?

Asian Games may have the presence of continental powerhouses like China, Korea and Japan but the Olympics are a different ball game altogether.

Nevertheless, India exceeded all expectations to win a men's team bronze and mixed doubles bronze in Jakarta, ending the country's medal drought at the Asian Games, but getting close to even one medal here would be a gargantuan task.

Before the paddlers arrived in Tokyo last week, the only little hope was in the mixed doubles category but an opener against the world number one duo from Chinese Taipei has made the challenge a lot tougher for A Sharath Kamal and Manika Batra.

The Asian Games bronze-medallists were brilliant in the Olympic qualifiers and ended up winning the competition.

However, in the run up to the Olympics, Sharath and Manika got only three sessions to train together before they boarded the flight to Tokyo.

The star pair has been having regular practice sessions here since their arrival and one can only hope Sharath and Manika can work out all their plans to perfection before Saturday morning.

Sharath along with G Sathiyan has also been handed a tough draw in the men's singles competition.

The 20th seed is drawn to meet reigning champion Ma Long in round three provided he clears the second round (first round bye) in his fourth Olympics.

If Sathiyan, who will make his Olympics debut, clears the second round hurdle, he will face Japanese sensation and third seed Harimoto Tomokazu, whom he stunned in the team event of the Asian Championships a couple of years ago.

Talking about his chances in the two events, Sharath said the probability of an upset is more in mixed doubles.

There could be an opening for the Indians if Manika is able to confuse her opponents with the pimpled rubber she uses.

"It is a tough draw both in both men's and mixed doubles but since it will be the first match of our opponents in the mixed doubles, we will try to surprise them," Sharath told PTI.

"We have come to know that the Chinese Taipei pairing has lost many times after losing the first set. We will try to put pressure on them in the first set and see how it goes," said the 39-year-old Indian great.

On the singles draw, he admitted that it could not have gotten any tougher with Long waiting in the third round.

Team Leader M P Singh feels Manika has a good chance to make the round of 16 which will be a big achievement.

The unseeded Manika is expected to beat Britain's Tin-Tin Ho in the first round and is drawn to meet 20th seed Margaryta Pestoska in the second.

If she manages to win her second match, the 62nd-ranked Indian meets 10th seed Sofia Polcanova from Austria for a place in the pre-quarterfinals.

Sutirtha, world number 98, plays 78th-ranked Linda Bergstroem from Sweden in the opening round.