With two wins out of three games, world no.4 India are sitting pretty at the second spot in Pool A. Check match and telecast details of IND vs ARG hockey match 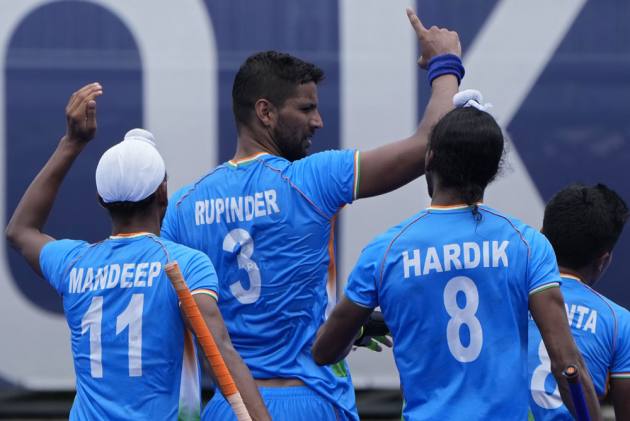 Indian men's hockey team needs a win against defending champions Argentina in their Pool A game on Thursday to book a quarter-final place in the Tokyo Olympics. This is their penultimate pool match of the Games.

With two wins out of three games, world no.4 India are sitting pretty at the second spot in Pool A, which is being headed by the unbeaten Australians which boast of a perfect record till now from three games.

Argentina, currently ranked seventh in the world, are placed at the fourth spot with one win, a draw and a loss respectively.

After a hard-fought 3-2 win over New Zealand, the Indians, who are in pursuit of their first Olympic medal in more than four decades, were drubbed 1-7 by Australia before the eight-time champions bounced back to outplay Spain 3-0.

India's last of the eight Olympic golds came way back in 1980 Moscow Games.

The Los Leones, on the other hand, drew their first game 1-1 with Spain, won 2-1 against hosts Japan and lost 2-5 to Australia.

The 3-0 win over Spain has definitely raised the confidence level of the Manpreet Singh-led side, especially after the morale-shattering loss to Australia but according to India's chief coach Graham Reid, a lot of improvement is needed in every aspect of the game.

India conceded as many as eight penalty corners against Spain on Tuesday, a statistic which continues to worry the team's Australian coach.

"...but a lot of things to work on from an improvement perspective. The fact that we gave too many corners (against Spain), that's always a concern when that happens. But the team did really well in terms of defending," he had said.

Manpreet's men played high pressure hockey from the word go against Spain and it is something they would like to continue against an ageing Argentine defence.

The Indian defence led by experienced goalkeeper PR Sreejesh, who had a nightmarish outing against Australia, too had a good day, and they would like to continue the momentum going ahead in the competition.

Going by head-to-head records in recent times, India definitely has an edge over Argentina.

In the FIH Pro League double header earlier this year, India beat Argentina 3-2 in the shoot-out after the first game ended 2-2. They also registered a comfortable 3-0 win in the next game in Buenos Aires.

In the practice matches, which were part of Olympic preparation for both teams, the Indians registered a 4-3 win, 4-4 draw, 0-1 loss and 4-2 win respectively.

"No doubt, we had a successful Argentina tour, but that was in the past, and this is a totally different occasion. So, we can't take any teams lightly on a platform like the Olympics," India captain Manpreet said.

"It's going to be a good game, and I think we will just have to stick to our skills and just repeat all the things, we do in our practice sessions."

Coach Reid feels his wards will have to play consistent hockey over the four quarters if they want to come out victorious against Argentina.

"We know each other pretty well, we played a lot of games with them in May. I am imagining that they will try different things, so we just need to make sure that we are ready for the unknown, which is always difficult," Reid said.

"We are looking forward to it, they are a tough team, so we need to be playing a lot much better. We need to play all four quarters like we played the first quarter against Spain," he added.