The defending champion from Georgia lifted 223 kilograms in the snatch and 265kg in the clean and jerk for a total 488kg on Wednesday. 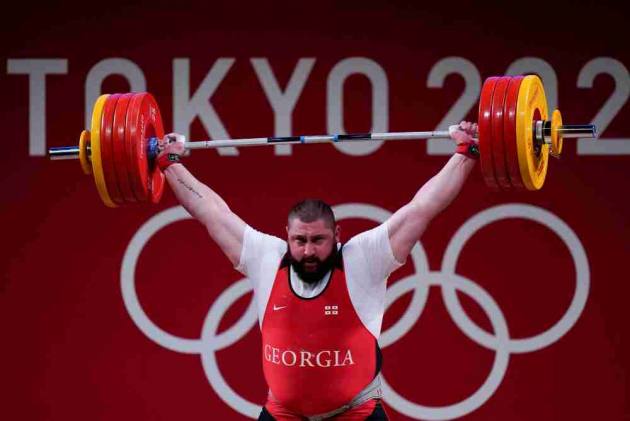 The defending champion from Georgia lifted 223 kilograms in the snatch and 265kg in the clean and jerk for a total 488kg on Wednesday. All three figures broke his own world records in the over-109kg men’s superheavyweight category.

Ali Davoudi of Iran was left in second place by the vast margin of 47kg.

Even Talakhadze's starting lifts were more than anyone else attempted, which meant he had to lift three times back-to-back in each half of the competition.

Talakhadze immediately pledged to return for a third Olympic gold in 2024, and his feat in Tokyo raised the question of whether he could become the first man to lift the once undreamed-of total of 500kg.

"At this stage it would be risky, this 500, but I will try my utmost and I will do everything in order to set the nearest margin at least to that limit," Talakhadze said through an interpreter.

Man Asaad of Syria took the bronze with a total 424kg for his country's first medal since its civil war began a decade ago. Syria's last Olympic medal in any sport was a boxing bronze in 2004.

"The medal means a lot to me and a lot to my country, Syria," Asaad said through an interpreter.

On the last day of weightlifting competition in Tokyo, the event was also a reminder of the shadow doping has cast over the sport. Talakhadze previously served a doping ban from 2013-15 and Brazilian lifter Fernando Reis was cut from the competition after failing a doping Test last month.

Also, Walid Bidani of Algeria missed the competition after Olympic organizers said he had been quarantined for health reasons. The statement didn't specify if Bidani had tested positive for the coronavirus.

Weightlifting's place at the next Olympics is still uncertain. The International Olympic Committee wants the sport's governing body to pass a new constitution before it will confirm it on the program following years of doping and corruption allegations.

The effort to introduce a new constitution stalled at an International Weightlifting Federation meeting in June.