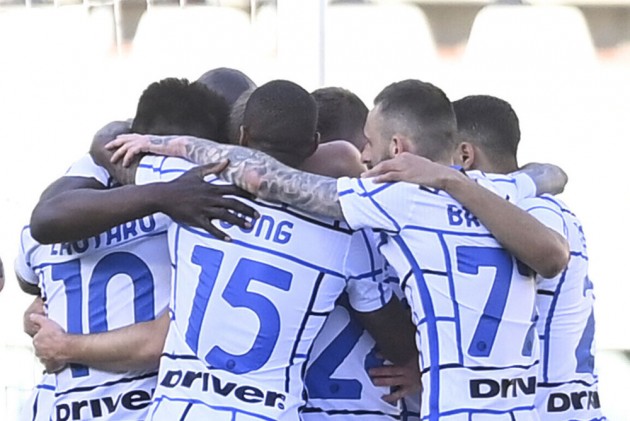 Inter strengthened their position at the Serie A summit as Lautaro Martinez's late header secured a slender 2-1 win over Torino on Sunday. (More Football News)

The Nerazzurri never looked like scoring during a dismal first half, but they forged ahead in the 62nd minute when Romelu Lukaku slotted home from the penalty spot.

The result moved Antonio Conte's side nine points clear at the top of Serie A, although Milan had the chance to restore a six-point gap by overcoming Napoli later on Sunday.

Martinez headed wide early on for Inter, but it was Torino who came closest to scoring during a largely tepid first half, in which the visitors failed to register a single shot on target.

Simone Verdi's free-kick from the left channel found Lyanco at the back post and the defender's header crashed back off Samir Handanovic's left-hand post.

Conte replaced Roberto Gagliardini and Ivan Perisic with Ashley Young and Christian Eriksen shortly before the hour mark in an attempt to inject some life into his side and it paid off almost instantly.

Armando Izzo brought down Martinez in the area and Lukaku stepped up to stroke home his 19th Serie A goal of the season.

Martinez had the final say, though, superbly heading home substitute Alexis Sanchez's cross in the 85th minute to seal all three points and crank up the pressure on Inter's title rivals.

What does it mean? Inter march on

Conte's men were far from their best against Torino, but superior quality eventually told against a side who have still won just three league games all season.

Their two goals came from just three shots on target - the same number as Torino - but Conte will point to 68.6 per cent possession and 371 more passes (687-316) as proof his side deserved to see off Davide Nicola's outfit.

Martinez was at the heart of Inter's triumph, winning the penalty for the first goal and steering a fine header past Sirigu for the winner. He is up to 14 goals in 27 Serie A matches this season, matching his best-ever return in the Italian top flight.

14 - #Lautaro Martínez has scored 14 goals in 27 matches in the current league season, equaling his record of goals in a single Serie A campaign: 14 in 35 games played in 2019/20. Toro.#TorinoInter #SerieA pic.twitter.com/WvioQ6Inzo

Perisic off the boil

The Croatia international has impressed this season, but this was a rare off day. Perisic struggled in his 56 minutes on the pitch, playing just one key pass to his team-mates and failing to take a single shot.

- Inter have won eight successive Serie A games for the second time this season. They strung together eight wins from November to January, before winning just one of their next four league games.

- Martínez has scored one goal in each of his last four Serie A matches against Torino.

- Martínez has scored four headers in this Serie A campaign, the most he has managed in a season in the Italian top flight.

- Sanabria has found the net in each of his last four Serie A appearances, scoring three goals in two games for Genoa at the end of last season and now two in two for Torino.

- Inter have failed to register a shot on goal in the first half of five Serie A games this season, including both matches against Torino.

- Only Milan's Franck Kessie (8) has scored more penalties than Lukaku (5) in Serie A this term.

Both sides face Sassuolo in the next week, with Torino hosting them on Wednesday before Inter take on Roberto De Zerbi's side at San Siro on Saturday.