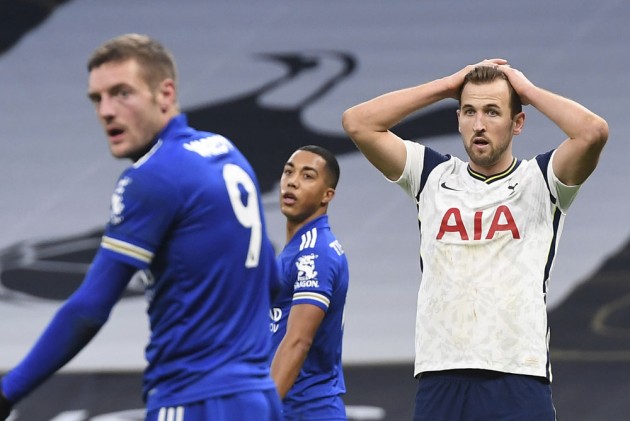 Tottenham's Premier League title hopes suffered a second significant dent in as many games as they fell to a 2-0 home defeat to Leicester City. (More Football News)

Looking to bounce back from the disappointment of conceding late in a 2-1 defeat to leaders Liverpool in midweek, Spurs instead saw a lacklustre performance deservedly punished.

A Jamie Vardy penalty put Leicester in front on the stroke of half-time before an own goal from Toby Alderweireld put the Foxes firmly in command.

Tottenham's failure to find a way back into the game leaves them six points adrift of Liverpool and sees them drop to fourth, with Leicester now second and four behind the champions.

Leicester move up to 2nd in the table with victory over Spurs#TOTLEI pic.twitter.com/3QAFe7hUS3

Leicester started strongly but their five shots in the opening 20 minutes yielded no reward and the first effort on target from either team did not come until the 34th minute, when Kasper Schmeichel was required to keep out a deflected free-kick from Harry Kane, who then headed over from close range.

But a largely uneventful first half ended with a familiar face putting Leicester in front, Vardy firing home from 12 yards in the fourth minute of stoppage time after Serge Aurier had barged into the back of Wesley Fofana just inside the area.

Spurs, trailing at half-time for the first time in 20 league games, threw on Gareth Bale for Tanguy Ndombele after the interval but looked to have fallen 2-0 down within three minutes of the restart when James Maddison superbly controlled James Justin's long ball and confidently slotted beyond Hugo Lloris.

However, Maddison was deemed to have strayed marginally offside by VAR but Leicester's lead was doubled just before the hour mark.

Vardy showed more desire than Alderweireld to attack a deep cross from Marc Albrighton and although Moussa Sissoko did to defend it, his header deflected off the his team-mate and past Lloris.

Schmeichel produced a stunning reaction stop to deny Son Heung-min but Spurs struggled to threaten thereafter as Leicester stood firm to claim a win that underlines their credentials as title challengers.

What does it mean? – Below-par Spurs pay the penalty

Vardy's successful penalty was Leicester's eighth of the season, at least three more than any other team in the Premier League.

The Foxes were full value for their win, Tottenham producing a display in stark contrast to the one delivered by Liverpool in their 7-0 thrashing of Crystal Palace on Saturday.

Though Vardy, who limped off late on, was a key figure in both goals, he benefited from excellent service from the three advanced players operating behind him.

Maddison supplied five key passes and was unfortunate to see a fine goal chalked off by VAR. Harvey Barnes and Albrighton played two each and the latter's far-post cross resulted in Alderweireld finding the back of his own net.

2 - Tottenham have both conceded a penalty goal and an own goal in the same Premier League game for only the second time, and the first since March 2000 in a 2-1 defeat to Arsenal. Self-inflicted. pic.twitter.com/w7uYYgfNd4

Aurier and Alderweireld at fault

Tottenham conceded a goal from the penalty spot and an own goal in the same Premier League game for only the second time, having first done so back in March 2000 in a 2-1 North London derby defeat to Arsenal.

Aurier's push was inexplicable and both Alderweireld and Sissoko should have questions to answer over their involvement in the second goal.

- Leicester will be in the first two places of the top-flight table at Christmas in consecutive seasons for the first time in their history.
- The Foxes have picked up 18 points in their last seven games on the road (W6 L1), the most they have collected in their first seven away games of a league season in their history (assuming three points for a win).
- Vardy has been directly involved in seven goals (five goals, two assists) in as many Premier League away games against Spurs, more than versus any other opponent on the road in the competition.
- Leicester boss Brendan Rodgers gained his first victory in all competitions against a Jose Mourinho side, having failed to win any of his previous seven such encounters (D2 L5).

A December 23 trip to Stoke City in the EFL Cup quarter-finals beckons for Tottenham, who visit Wolves four days later, a day after Leicester take on Manchester United at home.