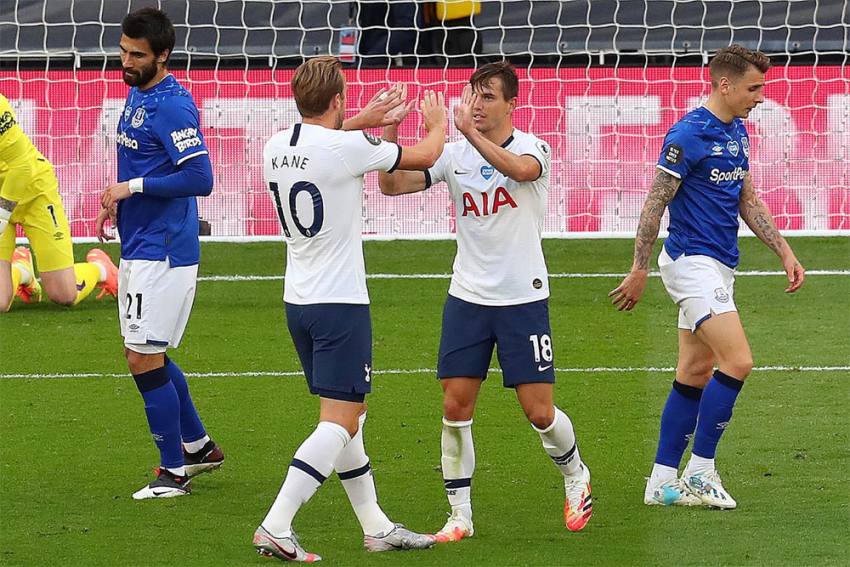 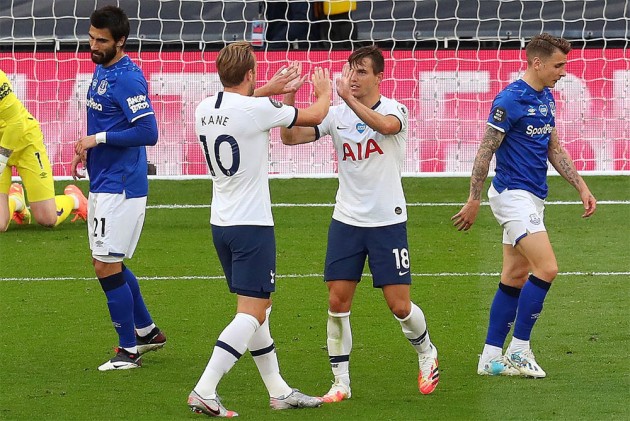 Tottenham bounced back from their defeat to Sheffield United in underwhelming fashion as a Michael Keane own goal earned a 1-0 Premier League win over Everton. (More Football News)

Spurs' Champions League hopes were left hanging by a thread after they slipped to a limp 3-1 defeat at Bramall Lane last time out.

Jose Mourinho's men were not much better in the more familiar confines of Tottenham Hotspur Stadium on Monday, but Keane's moment of misfortune proved enough to see off a dismal Everton side and secure the Portuguese's 200th Premier League victory.

Captain Hugo Lloris was involved in a half-time flare-up with Son Heung-min and an unconvincing triumph that moves Tottenham within seven points of fifth-placed Manchester United will do little to improve the mood in the camp.

3 - No side has scored more own goals than Everton in the Premier League this season (3), while no side have benefitted from more than Tottenham (4). Fortuitous. #TOTEVE pic.twitter.com/bnNfkTGtt0

Tottenham struggled to break down their visitors in the opening stages but a 21st-minute effort from Lucas Moura almost brought about the opener as his 25-yard effort skimmed the left-hand post.

Despite their half-time advantage, there were clear signs of discord in the Tottenham dressing room as an argument between Lloris and Son threatened to boil over as they left the pitch.

The pair had to be separated by their team-mates and only the reflexes of Pickford prevented Son from putting further distance between Spurs and Everton after the restart, the England goalkeeper twice denying the South Korea star.

Spurs had no problem protecting their lead but the prospect of them catching in-form United with five games to play looks an extremely unlikely one.

What does it mean? Win doesn't paper over cracks for Tottenham

Tottenham may be back to winning ways, but it was a victory claimed in uninspiring fashion and the frayed tempers Lloris and Son displayed at the interval suggest all may not be well for a team clinging on to faint hopes in the race for Champions League football.

The heated exchange with Lloris did not appear to have a negative impact on Son, who was the only player to offer a genuine threat of scoring in the second half.

Spurs' may have been punished for their malaise on another day, but Everton offered next to nothing as Lloris went largely untested.

- Tottenham boss Jose Mourinho has become the fifth manager to reach 200 Premier League victories, with only Alex Ferguson (322) doing so in fewer games than the Portuguese (326).

- Tottenham are unbeaten in 15 Premier League games against Everton (W8 D7), their longest run without defeat against an opponent in the competition.

- Everton have lost exactly half of their Premier League games in London (78/156), with only Newcastle United (79) losing more in the capital than the Toffees.

- Tottenham have kept a clean sheet in two of their last three Premier League games – as many as they had in their previous 14 in the competition.

Spurs travel to Bournemouth on Thursday, when Everton host Southampton.