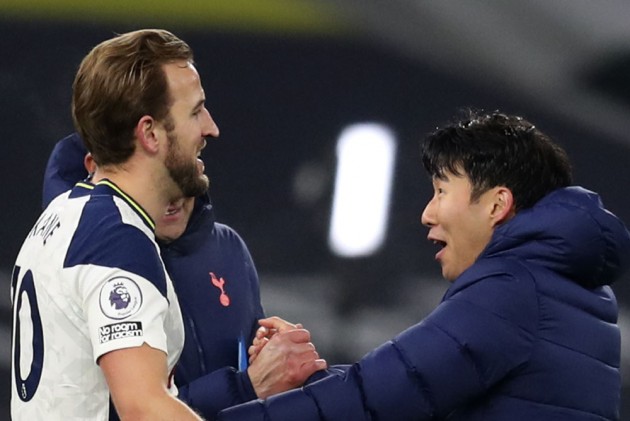 Jose Mourinho's side returned to the Premier League summit in style on Sunday, with Kane's strike in first-half stoppage time putting them two goals ahead at the culmination of a superb counter-attack.

Son Heung-min teed up Kane's landmark goal – the England captain's 11th against Arsenal – with the South Korea star having opened the scoring with a sensational 13th-minute effort.

Arsenal dominated after the break, but the damage was already done, and Hugo Lloris ultimately only had two saves to make, both from Alexandre Lacazette headers, as Mikel Arteta's team slumped to a third league defeat from four games.

11 - Harry Kane is now the outright top scorer in North London derbies in all competitions with 11 goals. Superman. pic.twitter.com/9GkqQcIOXR

A vociferous, socially-distanced crowd of 2,000 Tottenham fans had early cause for cheer when Arsenal's Thomas Partey, returning from a month-long injury lay-off, lashed wide, and they were sent into raptures moments later.

Having evaded a group of red and white shirts, Kane played in Son, who cut in from the left and curled a sublime long-range shot into the top-right corner.

Pierre-Emile Hojbjerg tried his luck from distance with a thumping strike which Bernd Leno kept out, but it was 2-0 on the stroke of half-time.

With the injured Partey off the pitch, Spurs caught Arsenal on the counter – Giovani Lo Celso finding Son, who teed up Kane to drill in a record-setting goal in off the bar from a tight angle.

Lacazette's header from Bukayo Saka's free-kick forced Lloris into his first save, before Pierre-Emerick Aubameyang nodded over.

Having replaced Partey, Dani Ceballos helped Arsenal wrest control in midfield, with the Gunners controlling well over 70 per cent of possession in the second half.

Lloris made another smart stop to deny Lacazette, yet Arsenal's attack – which has mustered just 10 league goals this season – was once again found lacking as their comeback efforts proved fruitless.

What does it mean? Mourinho masterclass leaves Arteta reeling

Mourinho's major positive from last week's draw with Chelsea – who briefly leapfrogged Spurs at the top thanks to a win over Leeds United on Saturday – was that his side were disappointed to only take a point from Stamford Bridge. The Portuguese masterminded another clinical counter-attacking display on Sunday as Tottenham showed the grit which was missing at the end of Mauricio Pochettino's tenure.

Kane's assist for Son's stunning opener was his 10th in the Premier League this season, from just 11 games. No player has ever reached 10 assists in fewer appearances from the start of a campaign in the competition – Kane pulled level with current Arsenal outcast Mesut Ozil's 2015-16 feat in that regard.

Son, whose last two goals have come from outside the area after his previous 20 were netted from inside the box, then returned the favour, and he and Kane have now combined for 31 Premier League goals, the second most of any duo after Didier Drogba and Frank Lampard (36).

250 & 100 - Harry Kane's strike against Arsenal was the 250th goal of his professional career for club and country (202 for Spurs, 32 England, 9 Millwall, 5 Leyton Orient, 2 Leicester), and his 100th at home for Tottenham in all competitions. Milestones. pic.twitter.com/wSMeWMeBEg

Kane the king in north London

After his 100th home goal for Tottenham across all competitions, Kane is now the outright top goalscorer in all-time north London derbies with 11 goals, having overtaken Emmanuel Adebayor – who played for both clubs – and Spurs great Bobby Smith.

It also brought up his 250th goal for club and country, with 202 coming for Spurs, 32 for England, and a further 16 coming across loan spells with Millwall, Leyton Orient and Leicester City.

Already through to the knockout stage, Spurs face Antwerp in the Europa League on Thursday, before returning to Premier League action against Crystal Palace. Arsenal face Dundalk, and then Burnley.