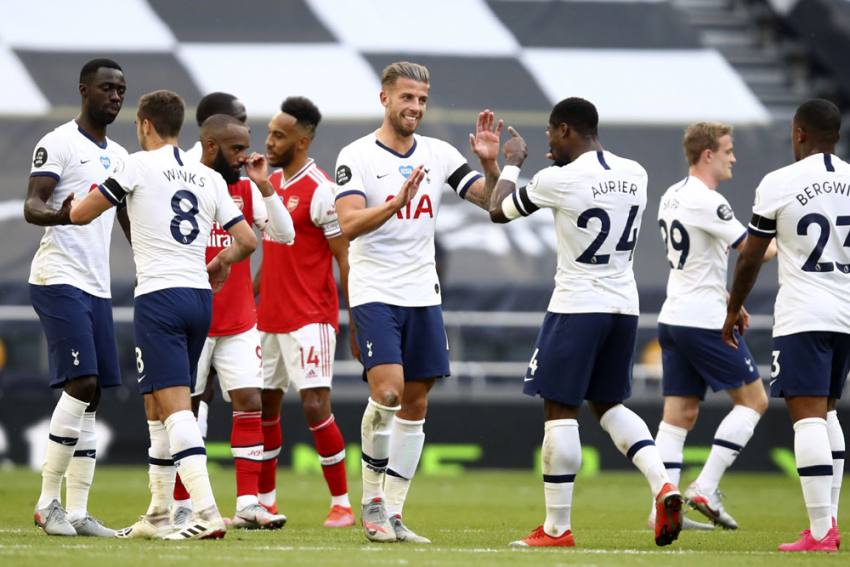 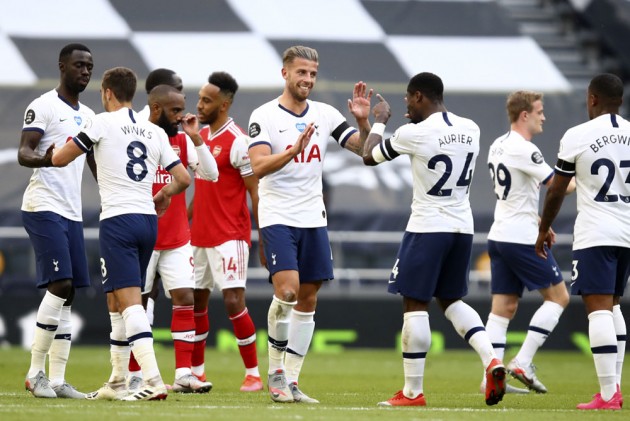 Spurs were second best for much of the encounter and conceded first, but after equalising and then holding firm against a dominant Arsenal, Alderweireld glanced home late on to move Jose Mourinho's men above the Gunners in the table.

While the game perhaps lacked some of the derby's usual ferocity, the first half certainly provided thrills and spills, with Alexandre Lacazette's spectacular opener and Son Heung-min's well-taken leveller both consequences of defensive mishaps.

The contest was considerably different after the break, however, as Spurs sat back and appeared to invite pressure on. After seeing Pierre-Emerick Aubameyang hit the crossbar, the hosts clinched victory nine minutes from time, keeping them in the hunt for a European spot.

1+1 - Son Heung-Min is the first Spurs player to score and assist in a Premier League game against Arsenal since February 2012, when Emmanuel Adebayor did so. Crucial. #TOTARS pic.twitter.com/qN7qtgZtUu

The match burst into life with Lacazette's goal – the Frenchman blasting into the top-left corner after Granit Xhaka had won possession back from Serge Aurier.

Arsenal's goalkeeper did make a decisive intervention just past the half-hour mark, though, tipping Ben Davies' piledriver onto the bar, before an Aubameyang free-kick went agonisingly wide at the other end.

Although the excitement initially dried up after half-time, a dominant Arsenal did go close to retaking the lead in the 59th minute, Aubameyang's fierce left-footed strike crashing off the bar.

Following the reprieve, Spurs appeared emboldened towards the end. Martinez was forced to pounce at the feet of Son after good work from Harry Kane but was helpless to prevent Alderweireld clinching a potentially vital victory for Spurs, the Belgian meeting Son's corner with a well-placed header.

What does it mean? Old habits die hard for Gunners

Just when you think Arsenal might be sorting themselves out, the same old issues come to light.

For the majority of proceedings, they were the better team. However, Son's goal came about through a defensive error, while poor marking contributed to Spurs' winner too.

While he may not have produced a scintillating individual display, Son was decisive with the first goal and then set up the second, while he also worked hard on the left flank with his tracking back – that will surely leave Hugo Lloris content.

Playing on the left of Arsenal's three-man defensive line, Kolasinac endured a difficult outing. His poor pass set up Son for the equaliser, while on several occasions he was slow to move out from the back, costing the Gunners the chance to counter.

- Tottenham (W4 D2) have gone unbeaten in six consecutive home league games against Arsenal for the first time since January 1968 (nine games).
- Mikel Arteta is the first Arsenal boss to lose his opening north London derby in charge in the Premier League since Bruce Rioch in November 1995.
- Jose Mourinho has never lost a home game against Arsenal, winning six and drawing four of his 10 matches – against no side has he faced more often at home without losing (level with Everton and Manchester United).
- Only West Ham (24) have dropped more points from winning positions in the Premier League this season than Arsenal (21).
- Alexandre Lacazette became the first Arsenal player to score home and away against Spurs in a single Premier League season since Per Mertesacker in 2012-13.
- Son Heung-min has scored 13 goals in all competitions at the Tottenham Hotspur Stadium, more than any other player (Harry Kane, 12).

Tottenham go to Newcastle United on Wednesday, while Arsenal host champions Liverpool the same day, as they prepare for their FA Cup semi-final clash with Manchester City three days later.