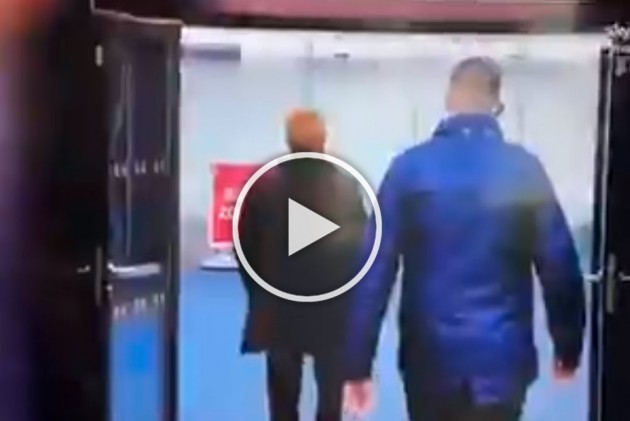 Jose Mourinho stormed down the tunnel before the final whistle of Tottenham's clash with Newcastle United on Sunday after another controversial handball call in the Premier League. (More Football News)

Spurs were winning 1-0 thanks to a Lucas Moura goal until deep into second-half injury time, when substitute Andy Carroll's header hit Eric Dier in the arm.

A lengthy stoppage ensued as VAR was first used to check whether there was an offside in the build-up, before referee Peter Bankes went to the touchline screen to review footage of the ball striking Dier, who had his back to Carroll after contesting a header.

Bankes then awarded the penalty, allowing Callum Wilson to fire in an equaliser with Newcastle's first shot on target of the match in the 97th minute.

Spurs boss Mourinho was by this stage walking back towards the dressing rooms, before the full-time whistle sounded.

Goalkeeper coach Nuno Santos was shown a red card after the final whistle as Spurs players and staff made their feelings clear.

Speaking on Sky Sports' coverage, former Liverpool defender Jamie Carragher called on football's lawmakers to change a handball rule that has already led to more than one controversy in the Premier League this season.

Sort this out @FIFAcom @UEFAcom @premierleague this penalty nonsense is ruining the game! #TOTNEW

"It's an absolute disgrace, an absolute joke," Carragher said. "Newcastle fans will be ecstatic, I can understand that, but everyone else in this country will say exactly what I'm saying and what I'm thinking.

"Eric Dier jumps for the ball and has no control over where his arms are going to be. There's a header half-a-yard away from him that hits him on the back of the arm. He has no idea what's going on.

"This is a joke. Whether it's the Premier League, the FA, FIFA, whoever is involved in this, stop it. You're ruining football for everybody. Absolute joke."

Carragher later tweeted FIFA, the Premier League and the Football Association, stressing that "this penalty nonsense is ruining the game".

Former England and Spurs striker Gary Lineker wrote on Twitter: "Ludicrous. Utterly ludicrous law exacerbated by VAR. Can we have our game back please?"

The Dier incident came after Crystal Palace boss Roy Hodgson railed against the handball rules after Joel Ward was similarly punished in the 2-1 loss to Everton, saying: "It's completely unacceptable. It's destroying my enjoyment of the game of football."

A week earlier, Palace had been awarded a penalty in their 3-1 win over Manchester United when a shot from Jordan Ayew brushed the hand of covering defender Victor Lindelof.