India failed to defend 237 against Pakistan in their second match of the ACC U19 Asia Cup 2021 at Dubai. Muhammad Shehzad, who hit 81 off 105 for Pakistan, won the player of the match award. 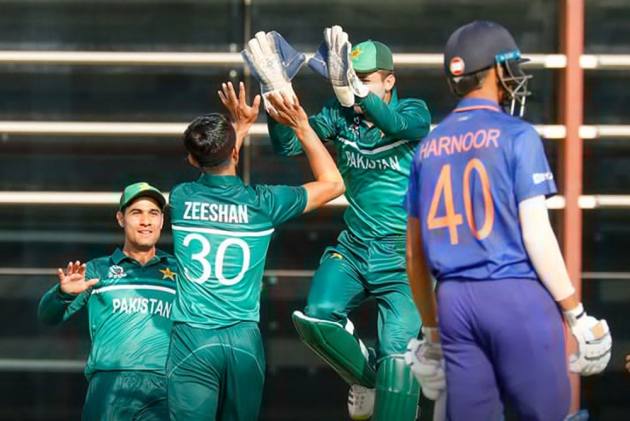 Pakistan edged out a mediocre Indian side by two wickets in a last-ball thriller in the U-19 Asia Cup in Dubai on Saturday. (More Cricket News)

Pakistan rode on a stroke-filled 81 by one-down Muhammad Shehzad and a late cameo by Ahmad Khan (29 not out) to chase down a target of 238.

Ahmad hit Ravi Kumar for a boundary in the game's final delivery to seal the game for his side.

Earlier in the day, the Pakistan U-19 bowlers, led by right-arm medium pacer Zeeshan Zameer (5/60), wreaked havoc as they bundled out the opposition for a sub-par 237.

India lost opener Angkrish Raghuvanshi (0), Shaik Rasheed (6) and skipper Yash Dhull (0) cheaply, with Zameer accounting for all the wickets to leave the batting side reeling at 14/3.

Harnoor made a patient 59-ball 46, striking six boundaries. When it looked like he would score big, Ali dismissed him in the 19th over to leave India at 96/5.

However, wicket-keeper Aaradhya Yadav's 83-ball 50, in which he hit three fours, coupled with Kaushal Tambe's 32 and Rajvardhan Hangargekar's brisk 33 off 20 balls, took India past the 230-run mark.

Chasing 238, Pakistan lost opener Abdul Wahid (0) early as Hangargekar castled him. Then, Maaz Sadaqat (29) and Shehzad (81) rallied the innings with a 64-run stand for the second wicket.

Bawa struck again by dismissing Haseebullah (3) as Pakistan slipped to 69/3. Skipper Qasim Akram (22) also fell cheaply as Pakistan found themselves in a spot of bother at 115/4, even as Shehzad continued to tore apart the opposition attack.

Hangargekar ran out Shehzad in the 37th over to bring India back into the contention as Pakistan lost half its side for 159.

However, Irfan Khan (32) and Rizwan Mehmood (29) took the game deep by adding 47 runs for the sixth wicket.

Then, Bawa pegged back Pakistan by removing Mehmood and Irfan Khan, but a composed Ahmad Khan, who hammered three boundaries and a six, completed the job for his team.