Riding on Cooper Connolly's 117, Australia posted 268 runs on the board before getting bundled out in 49.2 overs. In response, Hanooor Singh's unbeaten century alongside Shaik Rasheed's 72 helped India win the game. 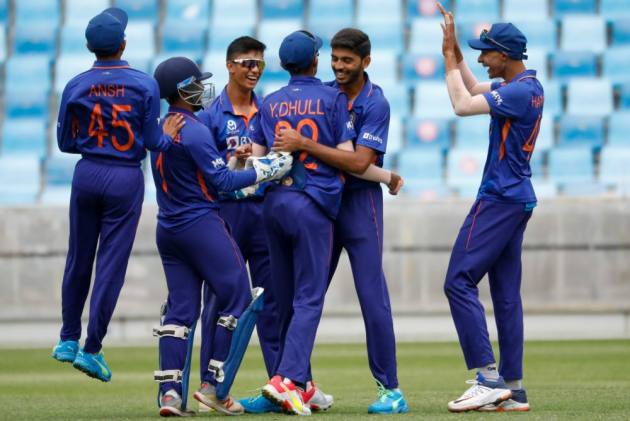 Opener Hanooor Singh's unbeaten 100 negated Cooper Connolly's 117 as India mauled Australia by nine wickets in a warm-up game ahead of the Under-19 World Cup in Guyana. (More Cricket News)

Australia posted 268 runs before being all out in 49.2 overs, with 18-year-old captain Connolly making 117 studded with 18 boundaries.

Hanooor led India's charge with his century that had 16 fours. He was well supported by Shaik Rasheed, who scored 72.

Both players retired hurt but captain Yash Dull (50 not out) took the side past the finish line with 15 balls to spare on Tuesday at the Providence stadium.

The tournament proper will begin on Friday and India will open their campaign against South Africa on Saturday.

Bangladesh posted a decent total of 277 after a tricky start when opener Iftakher Hossain edged to slip in the third over departing for just 1.

But Aich Mollah got his side back on track, making 82 from 82 deliveries with three sixes along the way.

Wicketkeeper Mohammed Fahim also chipped in with a timely 33, before captain Rakibul Hasan went after the Zimbabwe attack, hitting 36 before being run-out.

Tailender Ripon Mondol then managed a quickfire 39 from 26 balls to take the 2020 champions up to their final total.

The next man in Steven Saul launched a counter-attack, scoring 39 from 45 deliveries, but once he outside edged to Fahim his team were facing an uphill task. They were eventually bowled out for 110 runs.

England produced a middle-order rally to beat UAE in an exciting finish by two wickets.

Batting first, the UAE posted a credible 191-9 in their innings, even with losing openers Kai Smith for a duck and Shival Bawa for just eight runs.

However, Dhruv Parashar and captain Alishan Sharafu hit a combined 62 to keep Emiratis in the contest. Josh Boyden was the pick of England’s bowlers with figures of 5-42.

But Sharafu's team refused to go quietly, with tailenders Adihya Shetty and Jash Giyanani scoring 21 and 15 respectively. Set 192 to win, England’s response got off to a bad start when George Thomas was bowled by Sharafu with the first ball of the innings.

Lancashire rookie George Bell then took centre stage to steer England back on track. Arriving at the crease with his team at 23-3, Bell produced a wonderful 75 not out from 120 balls.

Pakistan put up an impressive display against Canada. The men in Green reduced them to 31-4.

Ethan Gibson offered some resistance with a stubborn 55, but Mihir Patel’s team were eventually bowled out for 164.

He was joined at the crease by Abdul Faseeh who hit 72 unbeaten, to help his team to an eight-wicket victory.