Malvika Bansod ensured that India quickly recovers from the opening game reversal as she dished out a dominating 21-13 21-15 win over former world No. 20 Beatriz Corrales. 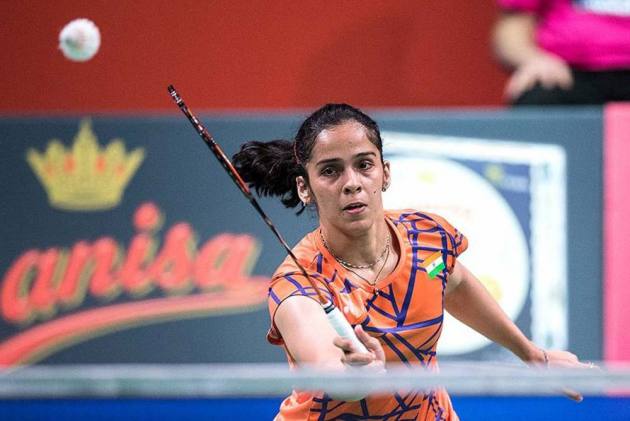 Ace shuttler Saina Nehwal was forced to retire midway through her opening match but India's young brigade produced a clinical display to notch up a fine 3-2 win over Spain and make a winning start to their campaign at the Uber Cup Final in Aarhus on Sunday. (More Badminton News)

Starting the proceedings for India, London Olympics bronze medallist Saina had to concede her match after losing the first game 20-22 against Spain's Clara Azurmendi as she developed discomfort in her groin area.

However, Malvika Bansod ensured that India quickly recovers from the opening game reversal as she dished out a dominating 21-13 21-15 win over former world No. 20 Beatriz Corrales to bring India at level par with the Spanish team.

Commonwealth Games bronze medallists N Sikki Reddy and Ashwini Ponnappa, however, could not get past world No. 122 pair of Azurmendi and Corrales, losing 18-21 21-14 17-21 in the second women's doubles match.

India will face Scotland in their second group B match on Tuesday.

Saina was forced to walk out from the court after feeling a sudden pain in her groin midway through the first women's singles match.

"There was a certain catch in my groin. I was surprised at how it happened. I was trying to get back my rhythm and I couldn't get it and I had to give it up because it was hurting when I was taking long lunges," Saina was quoted as saying by olympics.com.

The 31-year-old from Hyderabad said she will monitor her injury in the next few days.

"I think let us see the next three, four days, how it is. There are two more matches, so I just want to see how it goes. I don't want to take any sudden decision at the moment because my body feels good but this groin issue has to go."

It was, however, a delightful sight to see the youngsters stepping up.

First up was the left-handed Bansod, who produced a superb display, making Corrales run around the court with her angled returns to dominate the proceedings.

The Indian entered the break with an 11-8 lead before grabbing nine game points. She lost two chances before sealing the opening game with a precise net return.

Bansod, who has won Uganda and Lithuanian internationals this year, played some magnificent shots to erase a small deficit early on in the second game and held a 11-5 advantage at the interval.

Corrales tried to come back in the later stages but Bansod grabbed five match points before unleashing a brutal smash to seal the contest.

Tanisha and Rutaparna then showed great tactical acumen, leaving their opponents in awe with their smart badminton. The duo dominated the match with their power and precision as Paula and Lorena succumbed in a heap of errors.

Next, Aditi carried the momentum forward, dishing out a gritty performance as she kept her nose ahead after breaking off at 4-4, despite her opponent snapping at her heels.

She was more at ease in the second game, moving in giant strides to eventually seal it comfortably.

The men's team will take on the Netherlands later in the day.