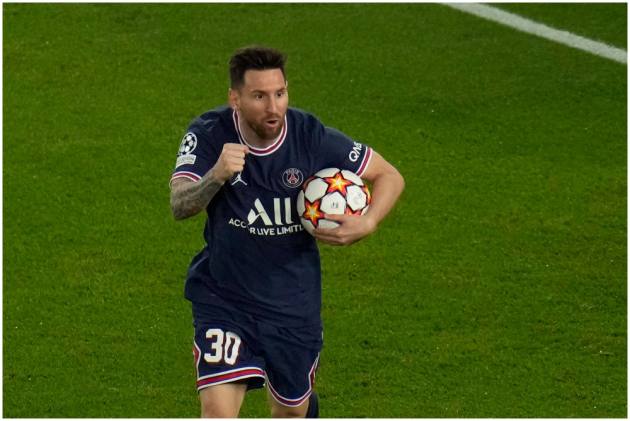 Lionel Messi scored twice in quick succession, including an exquisite Panenka-style penalty, to rescue Paris Saint-Germain as it rallied to beat Leipzig 3-2 in the Champions League after being dominated for long spells on Tuesday. (More Football News)

Messi equalized in the 67th minute, poking home from close range after goalkeeper Peter Gulacsi tipped his first shot onto the post. He then sent Gulacsi diving to the left before dinking the ball softly down the middle for his third goal since joining PSG from Barcelona.

They have all come in the Champions League, with Kylian Mbappe setting up the first two and winning the penalty for Messi’s winner against Leipzig in the 74th minute. Mbappe pointed straight at Messi to tell him he could take the spot-kick.

“It’s normal, it’s about respect,” Mbappe said. “He’s the best player in the world. I’ve always said it’s a privilege to play with him.”

It was the 34th time that Messi scored at least two goals in a Champions League game, bringing the Argentina captain’s total to 123 goals in the tournament. He remains second to longtime rival Cristiano Ronaldo on 137.

Mbappe then took a penalty in the fourth minute of stoppage time, awarded following a video review for a foul on right-back Achraf Hakimi, but he blazed it well over. PSG is atop Group A with seven points, one more than Manchester City. Leipzig is last with no points.

Mbappe opened the scoring with a ninth-minute goal. But after that, the visitors took control by pressing high up the field and forcing panicky PSG into numerous errors.

“(Were we) lucky, no? You make your own luck,” Mbappe said. “But of course, it was difficult, Leipzig played well. We had some low spells which were perhaps a little bit too low.”

Striker Andre Silva equalized in the 28th and midfielder Nordi Mukiele volleyed in powerfully in the 57th, with left back Angelino setting up both with his deft left foot.

“Leipzig have a good team, full of confidence,” PSG winger Julian Draxler said. “They caused us some problems, but we ruthlessly exploited the room we were allowed.”

PSG was missing forwards Neymar and Mauro Icardi, which gave Draxler a rare start alongside Mbappe and Messi in attack. Neymar has a sore adductor while Icardi was excused for family reasons.

Draxler’s instant flick from a long Marquinhos pass put Mbappe through, and he cut past a defender well before slotting the ball into the bottom left corner for the opening goal.

But with American coach Jesse Marsch barking orders from the touchline, Leipzig exposed glaring weaknesses in coach Mauricio Pochettino’s team, which despite winning nine of 10 league games has labored and needed late goals.

“We played well, we had lots of good moments, and it’s difficult to accept the result,” Marsch said.

“We had the game in hand at 2-1, they weren’t dangerous at the time. We have to take things step by step. We mustn’t make mistakes in this competition if we want to survive.”
Lively forward Christopher Nkunku, sold by PSG to Leipzig two years ago, caused big problems with his pace and movement.

After beating defender Presnel Kimpembe in the air, he nodded the ball down to Silva and the Portugal forward expertly cushioned the ball before volleying against the post.

One minute later, Silva was celebrating after Nkunku cleverly switched the ball from right to left and Angelino overlapped well to switch it back and pick out Silva near the back post.

Nkunku then went close after he easily skipped past his former teammate Kimpembe but dragged his shot just wide. When PSG’s defense went missing again Angelino had time to float over a lofted pass that Mukiele volleyed in.

Messi, who scored a brilliant first goal for PSG in the 2-0 win against Manchester City three weeks ago, played better in the second half but had little influence until his equalizer and then treated Parc des Princes to a delightful penalty.