Lautaro Martinez went closest to scoring for Inter as they were held to a 0-0 draw by lowly Udinese in Saturday's Serie A clash. 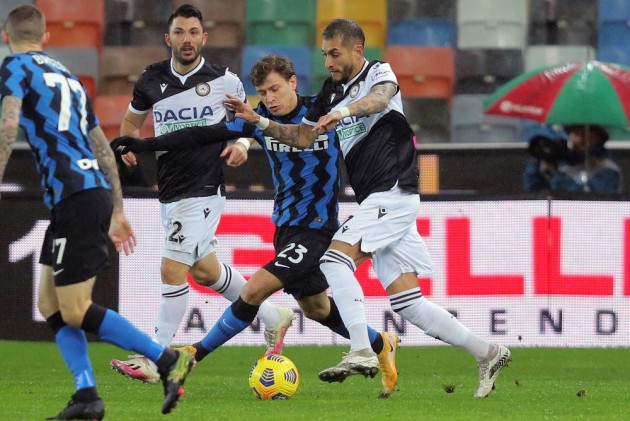 Antonio Conte saw red as Inter were held to a goalless draw by Udinese and missed out on the chance to overtake Serie A leaders Milan at the midway point of the season.  (More Football News)

Inter beat Juventus 2-0 last weekend to enhance their title credentials but could not follow that up with another win in Saturday's stalemate at the Dacia Arena.

Relegation-threatened Udinese entered the game winless in eight but they restricted Inter to minimal chances, the best falling to Lautaro Martinez in the first half.

Conte's frustration boiled over late on, the Inter coach receiving his marching orders due to dissent, though the Nerazzurri at least gained a point on their bitter rivals Milan, who were beaten 3-0 by Atalanta ahead of the sides' Coppa Italia quarter-final on Tuesday.

Bayern Munich are the only side to have scored more goals in Europe's top-five leagues than Inter this season but the visitors could not get going against Udinese.

Martinez had a goal correctly ruled out for offside from Inter's first meaningful attack and was denied by a superb one-handed Juan Musso save 15 minutes later.

Udinese otherwise kept their opponents at bay in a low-tempo first half, with Arturo Vidal and Ashley Young failing to truly test Musso from weak attempts.

Inter continued to lack ideas as the match wore on and were almost dealt a sucker punch when first Roberto Pereyra and then Rodrigo de Paul fired just wide of the target.

Achraf Hakimi lashed across the face of goal and a bad day for Conte got worse when he was booked and then sent off for arguing with the referee as Inter fired a blank for the first time in 22 league games.

What does it mean? Inter second at midway point

Conte dismissed Inter's tag of being title favourites ahead of this match and, on the basis of this performance, the three-time Scudetto winning boss was right to play things down.

Inter struggled to create much of anything and ended the game with only four shots on target, despite seeing 61.4 per cent of the ball. As a result of this draw, it is the Nerazzurri's fierce rivals Milan who can hold claim to being Winter Champions in the Italian top flight.

One-cap Argentina international Musso had four saves to make, though only one of those called him into serious action.

He did brilliantly to get down and push Martinez's shot past the post in the first half – the only attempt his compatriot managed, not including the disallowed strike early on.

Inter's attackers have an off day

Martinez was not alone in being left frustrated by Udinese's set-up as Romelu Lukaku also struggled to get involved in the match, managing only 32 touches – no outfield Inter player to play a full part in the match managed fewer

Six of those touches were in the opposition box but he only got away one shot, which was off target.

- Inter have won only one of their last four games in Serie A (D2 L1), having won their previous eight in a row
- Conte's side attempted 10 shots, which is their joint-fewest in an away game in Serie A this term (also 10 against Atalanta)
- Udinese and Inter have drawn two of their last four matches, as many as in their previous 22 encounters in Serie A
- The Bianconeri have failed to score for six games in a row against Inter, equalling their longest streak without scoring against a single side in Serie A
- Inter have kept clean sheets in back-to-back Serie A games for the first this time season

After facing Milan in the Coppa Italia quarter-finals on Tuesday, Inter return to Serie A action with a home match against Benevento next Saturday.

Udinese have an eight-day break before travelling to Spezia in their next league outing.