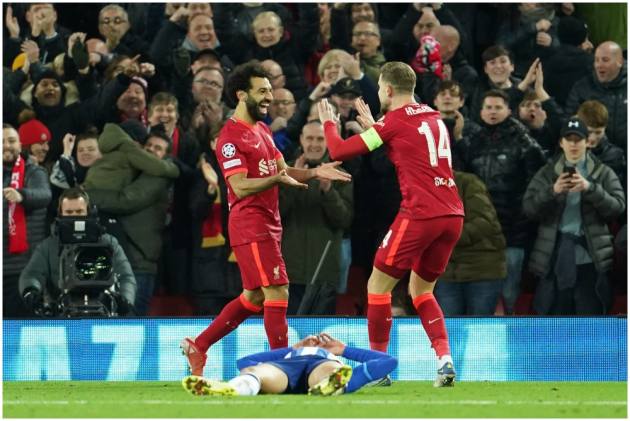 Liverpool was assured of advancing to the last 16 even before its fifth straight victory in Group B, while Porto stayed in second place ahead of a match against Atletico Madrid in two weeks that will help to determine which team qualifies with the English club.

Thiago’s 52nd-minute opener was a thing of beauty, the Spain midfielder meeting a headed clearance with a sweetly struck first-time shot off his laces from 30 meters (yards) out that stayed low, skimmed across the turf and flew into the corner.

“Wow,” Liverpool manager Jurgen Klopp said of the goal with a broad smile. Salah then scored a 10th goal in his last 10 UEFA Champions League games — and his 17th in all competitions this season — by dropping his shoulder as he drifted into the area from the right and shooting low inside the near post in the 70th.

Liverpool fielded a weakened team for the game, with regulars like Virgil van Dijk and Trent Alexander-Arnold getting the night off, while youngsters Neco Williams and Tyler Morton were handed rare starts. Klopp said there was no danger of his players not taking the game seriously, though.

“Some people might have thought we would play a little bit of an easy game but we were not here for that,” Klopp said. “Anfield sold out means we want to go for it and that’s what the boys did.” The six-time European champions will look to complete a sweep of victories in the group stage, a feat never achieved by an English team, in their closing game at AC Milan.

“It would be good to go through with all wins — that would be really impressive and good to take on into the competition,” Liverpool midfielder Alex Oxlade-Chamblerlain said, looking ahead to the game against Milan.

“It’s a great place to play football. Every single one of us dreams of playing at the San Siro on Champions League nights. That’s what we’re here to do, despite our position.” On the same night, Porto will host Atlético, which like Milan has four points. A win would guarantee Porto’s progression to the knockout stage.

The Portuguese team might have had a good chance to clinch qualification with a game to spare had it taken a couple of early chances for Mehdi Taremi, who misdirected a header from in front of goal, and Otávio, who sidefooted wide from an even better position after being set up by a cross from Luis Diaz.

Liverpool started to get on top by the half-hour mark, with two poor clearances by inexperienced goalkeeper Diogo Costa setting up chances for Salah and Sadio Mane. and Porto then seeing veteran center back Pepe go off injured.

Liverpool had goals by Mane and Takumi Minamino ruled out for offside either side of Thiago’s fabulous strike, which was only his second for the club following a move from Bayern Munich in the offseason of 2020.