Veljko Birmancevic and Jo Inge Berget scored in each half for Malmo, which missed plenty of chances to take a bigger lead against Ludogorets 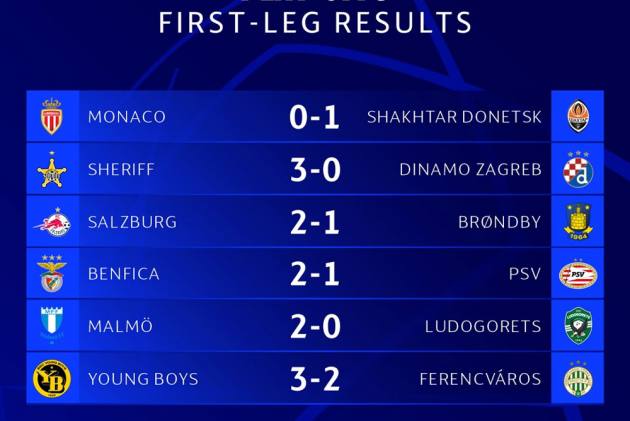 Swedish club Malmo closed in on its first Champions League group-stage appearance in six years by beating Ludogorets 2-0 in the first leg of their playoff, while Benfica and Young Boys also came away with wins. (More Football News)

Veljko Birmancevic and Jo Inge Berget scored in each half for Malmo, which missed plenty of chances to take a bigger lead against the Bulgarian champion.

Malmo is looking for its third group-stage appearance and first since 2015.

Benfica beat PSV Eindhoven 2-1 at home despite the Dutch side dominating possession for most of the game. Rafa Silva and Julian Weigl put Benfica 2-0 up at the halftime break before Cody Gakpo pulled one back for Eindhoven with a solo effort in the 57th for a valuable away goal.

Young Boys of Switzerland beat Ferencvaros of Hungary 3-2 despite going down to 10 men in the first half when Silvan Hefti was sent off with the score level at 1-1. Hefti was shown a straight red card for a last-man foul in the 25th, but Myrto Uzuni struck the resulting penalty against the woodwork.

Young Boys then took a 3-1 lead with goals from Vincent Sierro and Ulisses Garcia before Franck Boli scored his second of the night for Ferencvaros.

The return legs will be played next week.