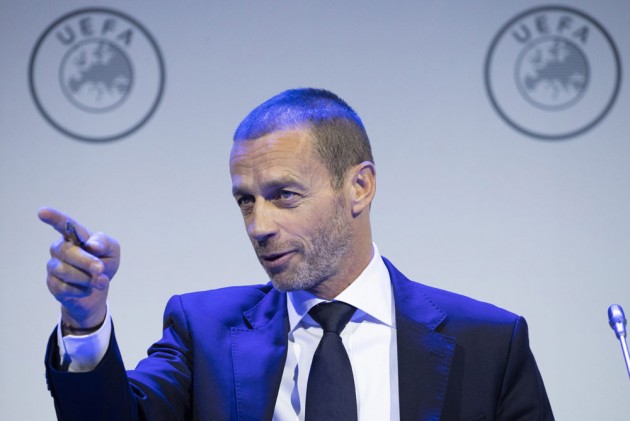 UEFA is considering adapting its Financial Fair Play regulations, president Aleksander Ceferin said Tuesday, as Manchester City take their fight to overturn a ban from the Champions League for breaching the rules to the Court of Arbitration for Sport. (More Football News)

"It is too early to say how it will look in the future but we are thinking about it and we will probably have to adapt it," the Slovenian Ceferin said at a press conference after the UEFA Congress in Amsterdam.

"It was very successful as a system, there are almost no losses in European football any more, but now we will probably have to adapt to different times."

Financial Fair Play (FFP) rules were introduced by UEFA to combat growing debt in European football by obliging clubs to balance their books.

Assessments began in 2011 when European clubs reported overall losses of 1.7 billion euros ($1.9 billion). In contrast, according to UEFA's most recent annual "benchmarking" report, the 700 top-tier clubs across the continent made a combined profit of 140 million euros in 2018.

However, the last decade has seen City and Paris Saint-Germain in particular, with mega-rich owners from Abu Dhabi and Qatar respectively, present a huge new challenge to Europe's established elite and to the FFP rules themselves.

City were banned from Europe for two years for serious breaches of FFP regulations. The reigning English champions last week filed an appeal to the sports court in Lausanne.

FFP rules mean that, over a three-year period, clubs are not permitted to lose more than 30 million euros with exceptions for costs such as youth development and women's teams.

UEFA's Club Financial Control Body found City ensured they did not fall foul of those restrictions by overstating their sponsorship revenue between 2012 and 2016.

Asked if he was confident the ruling against City could be upheld in the CAS appeal, Ceferin said: "As a lawyer, I respect the system and the system we have -- the investigatory chamber, the adjudicatory chamber, and at the end we have the Court of Arbitration for Sport in Lausanne.

"Manchester City appealed to the Court of Arbitration for Sports, and let's wait for the decision."

Meanwhile, General Secretary Theodore Theodoridis played down concerns that the security of UEFA staff could come under threat when City host Real Madrid in their Champions League last 16, second leg on March 17.

The match will be City's first at home in UEFA competition since the ban -- which has left fans angry -- was announced.

"We are absolutely confident there will be no issue," Theodoridis said.