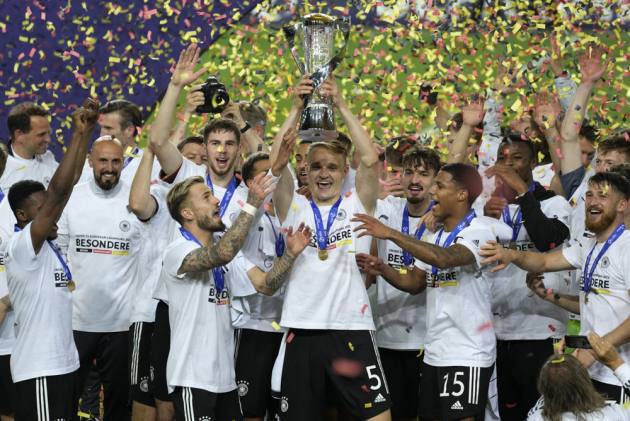 The Manchester City striker, who spent the 2020-21 campaign on loan at Belgian side Anderlecht, scored early in the second half to ensure Germany claimed the trophy for the third time, following 2009 and 2017 triumphs.

It made Nmecha the outright top scorer in the tournament with four goals.

Portugal, who carved out just one shot on target in Ljubljana, have now finished as runners-up in the competition on three occasions.

Florian Wirtz, who scored twice in the semi-final win over the Netherlands, went agonisingly close to handing Germany the lead after 15 minutes when his deflected effort from outside the penalty area crashed back off the underside of the crossbar.

Portugal goalkeeper Diogo Costa was called into action soon after to deny Nmecha and Arne Maier as Germany found their footing in the game.

Germany then deservedly went ahead in the 49th minute when Nmecha latched onto Ridle Baku's superb pass, rounded Costa and rolled into an empty net.

Adeyemi was denied again by the excellent Costa late on, but it mattered little in the end as Stefan Kuntz's side saw the game out with the minimum of fuss to spark jubilant scenes.