Arsenal's dismal form gave Freddie Ljungberg his chance in charge, but the former Highbury favourite was not about to criticise Unai Emery 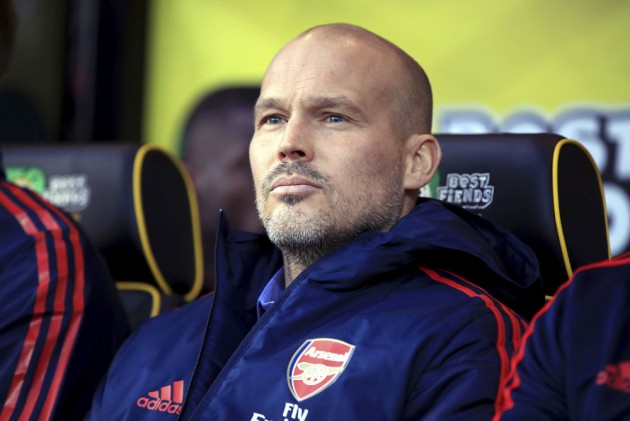 Ljungberg took charge of his first game as interim Gunners boss at the weekend, where they twice came from behind in an eventful 2-2 draw at Norwich City.

It meant Arsenal remained without a Premier League win away from home since the first weekend of the season, while their previous top-flight triumph of any description came on October 6 against Bournemouth.

Brighton and Hove Albion will be the next team that look to prolong that slump when they visit Emirates Stadium on Thursday, but Ljungberg defended Emery, who led Arsenal to the final of the Europa League last season before promoting the former Sweden international to his first-team coaching setup.

"I've done two training sessions now and I don't want to talk about the coaches before," Ljungberg told a pre-match news conference.

"I think Unai did a great job and was a great leader, and a fantastic coach. That's not for me to judge. I look forward.

"The main thing for me was that when we were at Norwich, we hadn't won an away game since the first game of the season.

"I felt that the players could react and, in my opinion, we played well offensively. It was good. But now we go forward."

Indeed, Ljungberg felt Arsenal's problems at Carrow Road came in transition, with an under-fire defence frequently exposed as a result.

"The general feeling is probably the same as I had after the match: we started extremely well, played very well offensively but had a problem transition-wise, so they got shots on target and chances just from the transition of an eight-yard sprint, which we need to stop," he explained.

"So that’s something we will focus on. Other things is my feeling that we got in behind their midfield and behind their backline a lot.

"But if we play a transition game like we did, we won’t win any games, so that’s something that I can coach and try to improve."

In terms of the methods Ljungberg employs to seek that improvement, he can call upon the inspiration and advice of some highly respected names.

A star of Arsene Wenger's celebrated Arsenal 'Invincibles' team, he also forged a strong bond with Sven-Goran Eriksson when his countryman was England manager.

A whirlwind start to life in the Arsenal hotseat – Emery was sacked last Friday in the wake of a sapping Europa League loss to Eintracht Frankfurt – means the 42-year-old has not yet had chance to catch up with Wenger, but that is something he intends to arrange.

"I would really like to speak to him. I'm in contact with him, but I haven’t spoken to him because it's been a bit hectic, but it’s on my list to do so," Ljungberg said, before confessing he has already borrowed what he can from the Eriksson handbook.

"Sven is intelligent, I spoke to him a lot when he was the manager of England because he was watching our games.

"I know in the past, some stories of how he treated players and how he made them feel good and things like that. I have stolen a little bit of those ideas.

"He’s a great coach. It's been a long time, and I hope I can speak to him soon."