Many claimed that Srinivasa Gowda's timing was faster than Usain Bolt, who holds the world record in the 100-metre race at 9.58 seconds. Watch the Karnataka resident's unbelievable feat in a traditional buffalo race here 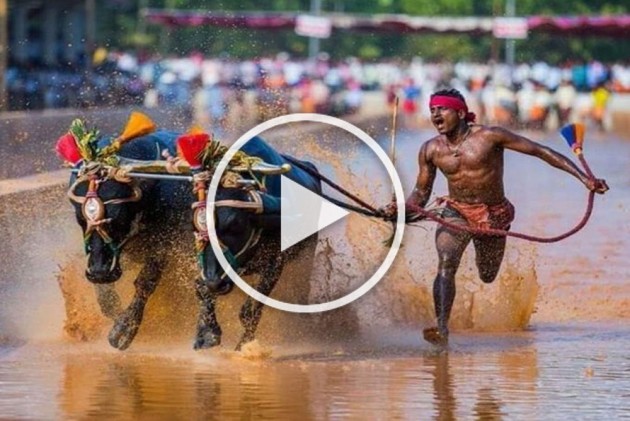 Video clips of a Karnataka resident, identified as Srinivasa Gowda, who took just 9.55 seconds to run a distance of 100 metres have surfaced on Friday to stun the world. (More Sports News)

Many claimed that the Gowda's timing was faster than Usain Bolt, who holds the world record in the 100-metre race at 9.58 seconds.

MUST READ: A Day At The Races - The Kambalas

Here's one post: "Mr. Srinivasa Gowda from Moodabidre, Karnataka ran 100m in 9.55 seconds at a #Kambala (buffalo race). He was faster than @usainbolt who took 9.58 seconds to create a world record.

#WATCH : Mr. Srinivasa Gowda from Moodabidre, Karnataka ran 100m in 9.55 seconds at a #Kambala (buffalo race). He was faster than @usainbolt who took 9.58 seconds to create a world record.

#SrinivasaGowda, the man from #Karnataka Who ran 100 mtr in 9.55 seconds at a #Kambala (buffalo race).

Interesting fact is that the speed of @usainbolt, the fastest man in the world is - 9.58 secs. I request Usain bolt, pls congratulate..."Srinivasa Gowda" pic.twitter.com/ck23w6wabT

Kambala is an annual race held in Karnataka where people sprint 142m through paddy fields with buffalo. Traditionally, it is sponsored by local Tuluva landlords and households in the coastal districts of Dakshina Kannada and Udupi.

The 28-year-old is a construction worker took just 13.62 seconds to cover a distance of 145 metres, covering the first 100 metres in just 9.55 seconds, at the Kambala at Aikala village about 30 kilometres from Mangaluru.

A user wrote: "True, but physics says something was make him run faster. Anyhow, appreciating his strength."

Another wrote: "What a physique... it seems someone carved him from stone... marvelous..."

A post read: "That's super... If timing is accurate, then it's great discovery #Karnataka."

"OMG. Is it real? Indian government needs to look into this man's speed. Can you reach out to the Sports Authority of India or the Sports Ministry?" asked a user.

"This guy will surely get us a gold medal at the Olympics!" another user remarked.

"People are comparing me to Usain Bolt. He is a world champion, I am only running in a slushy paddy field," said Gowda while talking to ANI.

People took to social media and drew a parallel between him and Bolt with many hailing Gowda and his accomplishment on the muddy field.

The jockey has been called for trials by the Sports Ministry, with union minister Kiren Rijiju promising to "ensure that no talents in India are left out untested."

"I'll call Karnataka's Srinivasa Gowda for trials by top SAI Coaches. There's lack of knowledge in masses about the standards of Olympics especially in athletics where ultimate human strength & endurance are surpassed. I'll ensure that no talents in India are left out untested," tweeted Union Sports Minister Kiren Rijiju on Saturday.

Shashi Tharoor, Congress MP from Thiruvananthapuram, Kerala, had earlier tweeted: "Faster Than Usain Bolt? Karnataka Man Running With Buffaloes Covers 100 Metres in Just 9.55 Seconds. I urge the Athletics Association of India to take this man under their wing & make an Olympic champion of him. Wonder how many hidden talents we have!"

For the uninitiated, Kambala remains a controversial sporting event for its association with animals. In 2016, the Karnataka high court issued an interim order stopping all Kambala events.