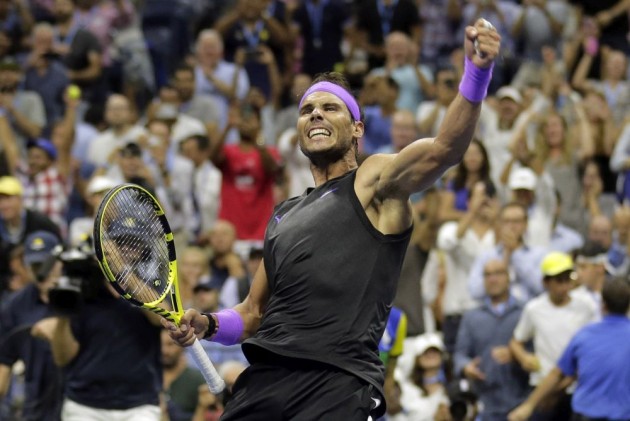 Rafael Nadal recovered from a second-set blip to progress to the quarter-finals of the US Open in style with victory over Marin Cilic. (TENNIS NEWS)

Nadal needed to play just two matches to reach the fourth round and won each of them in straight sets, with Cilic presenting his first real challenge of the tournament.

However, Nadal's hugely impressive reaction after dropping the second set was that of a player still somehow operating at the peak of his incredible physical powers.

Nadal began a run of three successive breaks in the fourth game, the key blow coming two games later as a superb flicked forehand gave him the initiative once more after Cilic had struck back.

Cilic fired wide on the return to give the Spaniard the opening set but the Croatian was a different animal in the second, pairing his unwavering ambition with accurate groundstrokes and deftness at the net.

He broke for a 3-1 lead as Nadal looped a mishit backhand long, an error that proved enough for Cilic to become the first player to take a set off the 18-time Grand Slam champion in the tournament.

Cilic's squaring of the match only served to fuel Nadal, however, and the World No. 2 broke in the fourth game of the third in astonishing fashion.

Nadal twice attempted to lob Cilic and, after the Croatian met the second with a desperate smash, unleashed a cross-court backhand to bring up three break points, with the 2014 champion double-faulting on the first.

Another double fault gave Nadal a chance for the double break, which he took emphatically with a scintillating forehand down the line that had him jumping for joy in celebration.

The set was secured as Cilic went long on a return and it was clear the end was nigh when he sent down another double fault in the opening game of the fourth.

Cilic was eventually able to stem a run of nine successive Nadal games to avoid a bagel, but he was powerless to stop the three-time US Open winner taking another step towards a prospective final with Roger Federer, providing one final flourish with a glorious forehand around the net post in the decisive game.

The German has made just two major quarter-finals – at the French Open in 2018 and 2019 – and suffered his second fourth-round loss at a major this year.

Zverev played five-setters in the opening two rounds and was pushed to four in the third.

"I had some things that were bothering me because of the fall I had two days ago," he told a news conference after his loss. "I couldn't practice freely yesterday. Warm-up was tough today. My right hip and my back is very swollen because of the fall.

"But other than that, fatigue... obviously it was very tough matches, but I feel fine."