US Open 2021: Novak Djokovic's Win Keeps Him On Course For Calendar-year Slam 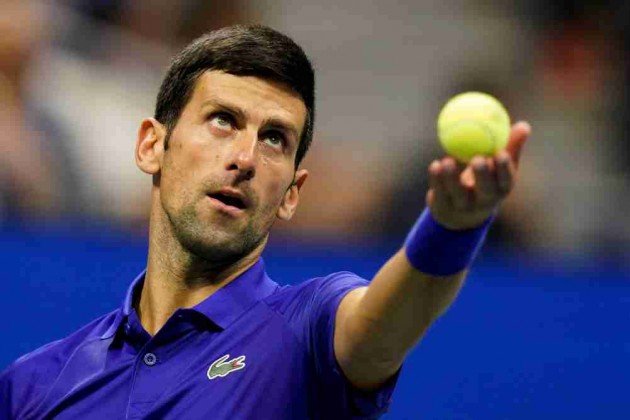 Novak Djokovic missed an overhead and stared over toward a section of the Arthur Ashe Stadium stands. (More Sports News)

After taking the next game, Djokovic glared in that direction again. Later, he spoke to the chair umpire about someone making noise in the middle of points, considered a no-no in tennis.

That, then, is pretty much what provided some intrigue and interest for Djokovic's second-round match at the U.S. Open, because the ultimate outcome seemed fairly obvious after all of about 15 minutes Thursday. Or maybe even before he and his 121st-ranked opponent stepped on court on a cool, breezy evening.

And that, surely, pleased Djokovic as he took another step toward completing the first calendar-year Grand Slam in men's tennis since 1969 and claiming a 21st major championship to eclipse the mark he shares with Roger Federer and Rafael Nadal.

What Djokovic wasn't thrilled by during a 6-2, 6-3, 6-2 victory over Tallon Griekspoor was some of the distractions arriving during the run of play.

"I came out on the court with the right intensity, with the right focus. Definitely was a better performance from my side than a couple of nights ago," the No. 1-ranked Djokovic said, referring to his win Tuesday, when he dropped a set and was taken aback by hearing what he thought were boos but actually were last-name chants of "Ruuuuune!" for his 18-year-old foe, Holger Vitus Nodskov Rune.

Here's what matters the most: Djokovic is 2-0 at Flushing Meadows this week and 23-0 in Grand Slam tournaments this year, with five more wins standing between him and history.

"I am motivated as ever to do well,” said Djokovic, a 34-year-old from Serbia who will face 2014 U.S. Open finalist Kei Nishikori next. “I am trying to be the best I can be every single day and let's see what happens.”

This was only the fourth Slam match for Griekspoor, a 25-year-old Dutchman who tends to appear on the lower-level ATP Challenger Tour. And he never really stood much of a chance against Djokovic, who broke to lead 3-1 and was on his way.

Djokovic dominated every statistical category. He served well, to the tune of 13 aces. He serve-and-volleyed occasionally. He returned well enough to win half of Griekspoor's service games. He dominated baseline exchanges.

Maybe that's why ESPN's telecast cut away in the third set.

About the only problems No. 1 Ash Barty and other top women encountered earlier Thursday came in the delays trying to get to Flushing Meadows in the aftermath of Hurricane Ida's remnants blowing through the Northeast a night earlier.

Barty, a two-time major champion including at Wimbledon in July, three-time Grand Slam champ Angelique Kerber, Tokyo Olympic gold medalist Belinda Bencic, double Wimbledon title winner Petra Kvitova and other seeded women including No. 14 Anastasia Pavlyuchenkova, No. 17 Maria Sakkari, No. 23 Jessica Pegula and No. 28 Anett Kontaveit all won in two sets during the afternoon to reach the third round.

Among the men's winners were Summer Games gold medalist and 2020 U.S. Open runner-up Alexander Zverev, 2021 Wimbledon finalist Matteo Berrettini, No. 17 Gael Monfils and No. 22 seed Reilly Opelka of the U.S.

With the sun out and nary a cloud around, play in second-round matches on the outer courts was pushed back from 11 a.m. to noon to allow the U.S. Tennis Association time to clean up downed tree branches and other scattered debris and make sure everything was ready for competition on Day 4 of the year's last Grand Slam tournament.

Once all was ready to go, it was just a matter of players' transportation navigating traffic delays caused by road closures and vehicles that were abandoned overnight; a trip from Manhattan to Queens that normally might take 30-45 minutes took 1 1/2 hours or longer for some.

"We had to do a full assessment of the grounds and making sure the courts were playable and that Hawk-Eye (electronic line-calling) would function," USTA spokesman Chris Widmaier said.

He said that while the forecast called for heavy rain Wednesday night, New York police did not advise the USTA to cancel the evening session during a routine twice-daily briefing.

Eventually, the National Weather Service office in New York declared flash flood emergencies in the region, subway stations and tracks became so flooded that the Metropolitan Transportation Authority suspended all service and New York City put in place a travel ban until 5 a.m. Thursday for all non-emergency vehicles.

"Trying to grasp what was happening here on-site was quite unbelievable, and I know that there has been a lot of flash flooding and a lot of people in trouble," Barty said.

"Hopefully, a lot of people from site got home safely, and New Yorkers in general were able to get home, because it was quite a wild storm. It did wreak some havoc; obviously there was a later start today, I think, because of, obviously, the damage to the site."

"It took us a while to get in this morning, but we kind of allowed for that time," she added, "expecting there would be a little bit more of an issue than just a normal commute coming in." (AP)