US Open: Justin Thomas Registers Superb 65 As Tiger Woods Closes With 73 In Roller-coaster Round

Tiger Woods, who had more ups and downs than the undulating Winged Foot course, finished with three bogeys and a double in his last six holes 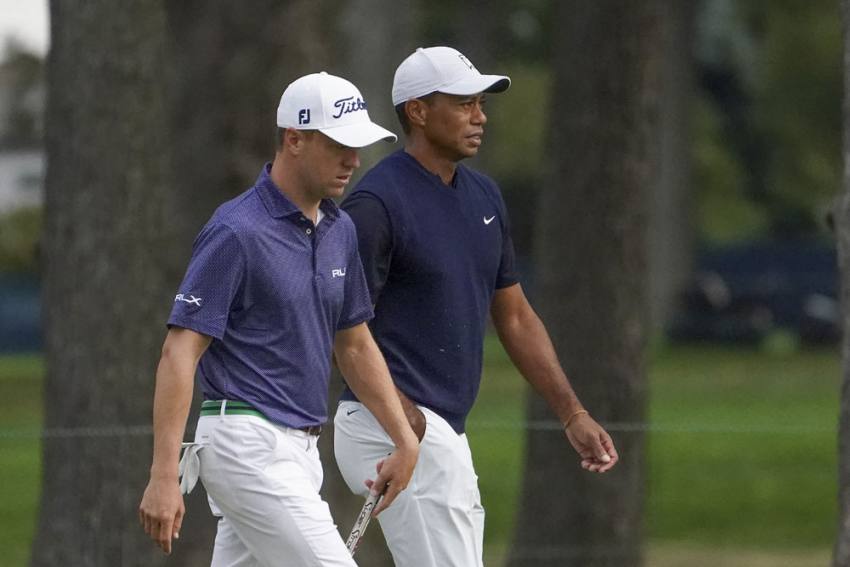 Justin Thomas, left, and Tiger Woods walk up to the seventh green during the first round of the US Open Golf Championship
AP Photo/John Minchillo
V Krishnaswamy 2020-09-18T18:30:27+05:30 US Open: Justin Thomas Registers Superb 65 As Tiger Woods Closes With 73 In Roller-coaster Round 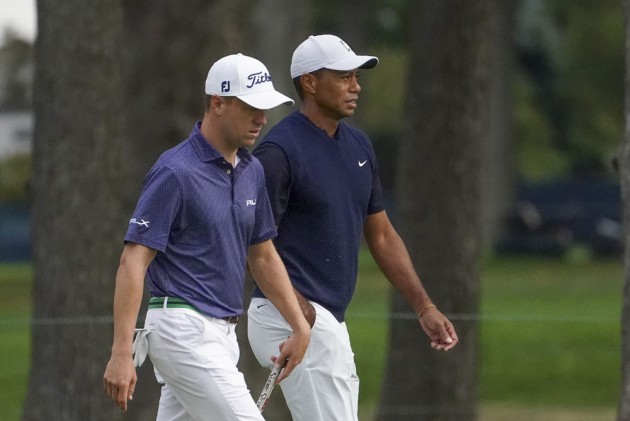 Justin Thomas recorded the lowest ever score in a US Open at Winged Foot with a brilliant 5-under 65 that had six birdies against one bogey on Thursday at Mamoroneck, NY. (More Sports News)

His playing partner and 15-time Major winner Tiger Woods rode a roller-coaster for his 73, which had him swinging from agony to ecstasy more than once and ultimately finished with a massive disappointment in the form of a bogey-double bogey closure to the first round.

Woods, who had more ups and downs than the undulating Winged Foot course as he finished with three bogeys and a double in his last six holes, was lying Tied-71st.

Five previous U.S. Opens at Winged Foot saw a total of 17 opening rounds under par while the 2020 edition’s first round saw 21 scores of under par. Prior to Thomas’ 65, the lowest ever at an US Open at Winged Foot was 66 by Fuzzy Zoeller in the second round in 1984.

Thomas, 27, who had three wins last season, leads the trio of Patrick Reed, Matthew Wolff, playing only his second Major, and Thomas Pieters by one, while Rory McIlroy, who opened with 67 or better in each of his four Major titles, shot 67 and was placed Tied-fifth.

McIlroy was joined by Englishman Lee Westwood, who opened with 3-under 67 in his first start on the PGA TOUR since a missed cut at the Arnold Palmer Invitational in March.

Thomas reaped benefits from his decision to start work with a new putting coach, John Graham, after ending his long-time relationship with Matt Killen with whom he had worked since college.

Thomas said his speed control was “terrible,” and Graham seems to have helped work on it with better visualization and green-reading. Thomas had one bogey and six birdies, including three in a row over the 9th, 10th and 11th holes.

Thomas needed just 28 putts at a course which is notorious for its undulating and speedy greens. The 30-foot putt on 18th summed up his confidence and gave him a one-shot lead over Patrick Reed (66), whose card included a hole-in-one. The 2018 Masters champion Reed's card included a double bogey.

Woods seemed to have dodged the bullets as he was one-under through 12 after being one-over at the turn. And then he overcame bogey-bogey on 13-14 with a birdie on 16th to get to even par with two holes to play on the first day of the 120th US Open. And then he dropped three shots over the last two holes – a bogey on 17th and a double bogey on 18th to finish at 3-over 73. It was a roller-coaster the entire day.

To have any chance of making a charge for his 16th Major and an 83rd PGA Tour win, Woods must first ensure a solid second round to get into the weekend.

Despite some bad breaks, Woods was alright till those last two holes. He said, “did not finish off the round like I needed to. I made a bunch of putts in the middle part of the round. It seemed like most of my drives on the front nine landed in the fairway and ended up in bad spots, and I tried to stay as patient as possible.”

After a bogey on the 17th where he drove wild into deep rough, Woods missed the 18th fairway to the left, but used all the power to get just short of the green. Then he chunked a chip shot that failed to make the surface. His fourth shot rolled out above the pin. He missed the nine-foot downhill putt and ended with a double.

Reed said, “I was excited about it, but really I knew from that point that, hey, you need to settle down, get ready for the next hole.”

Pieters had a steady five birdies against one bogey as 23 players were under par, which was in sharp contrast to the kind of scoring Winged Foot has seen in its last two stagings of the US Open. Australia's Geoff Ogilvy shot 5-over par to win the last US Open at the venue in 2006, while American Hale Irwin was 7-over in 1974.

Wolff, who was T-4 at the PGA Championship, had five birdies against one bogey.

Defending champion Gary Woodland shot 74 that included a 1-under on the front nine and 5-over 40 on back nine. He is T92.

Phil Mickelson (T142), who needs to win the U.S. Open to complete the career Grand Slam, posted 9-over 79, his highest opening round in a major since the 2017 PGA Championship, where he missed the cut.

The U.S. Open is the second event of the 2020-21 PGA TOUR Season and the first of six majors, including two editions each of the U.S. Open and the Masters Tournament; originally scheduled for June 15-21, the tournament is being played in September for the first time since 1913.