Referring to the upcoming Indiana Pacers vs Sacramento Kings preseason National Basketball Association (NBA) games in Mumbai in October, US President Donald Trump asked Indian Prime Minister if he's invited to the country during the 'Howdy Modi' event at Houston 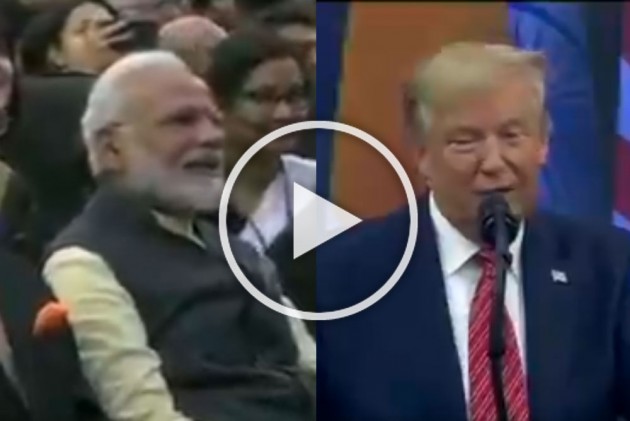 US President Donald Trump announced that India will have access to another world-class product - (National Basketball Association) NBA basketball next week.

"And very soon India will have access to another world-class American product, NBA basketball. Wow, that sounds good."

"Next week thousands of people will gather in Mumbai to watch the first-ever NBA basketball game in India," he said at the NRG Stadium during the Howdy Modi event before a 50,000 strong Indian American crowd.

He then smilingly asked, "Am I invited Mr. PM. Haha. I may come, be careful, I may come," he said, in a jovial manner.

The NBA announced in December 2018 that the Indiana Pacers and Sacramento Kings will play in two preseason games on October 4 and 5 in Mumbai.

#WATCH US Pres Donald Trump: Very soon India will have to access to another world class American product-NBA basketball. Wow, sounds good. Next week thousands in Mumbai will watch the first ever NBA game in India..am I invited Mr. Prime Minister? I may come, be careful I may come pic.twitter.com/QmcyeXurLg

After the hugely successful 'Howdy Modi' event in Houston that saw Trump share the stage with him, Modi on Sunday left for New York on the second leg of his United States tour.

PM Modi, who addressed a 50,000 strong crowd of Indian Americans at the NRG Stadium at the 'Howdy Modi' event, left for New York where he will address the UN General Assembly on September 27.

The camaraderie shared by the two leaders came to the fore during Sunday's event, right from Modi walking with Trump to the event's stage upon the US President's arrival at the stadium to the victory lap taken by Modi-Trump, hand in hand, towards the end of the community summit.