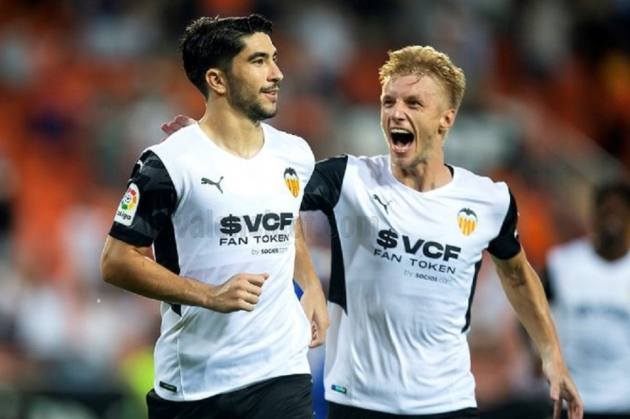 With fans back in the stands, Valencia overcame a red card in the third minute to defeat Getafe 1-0 in the opening match of the Spanish league. (More Football News)

Valencia lost midfielder Hugo Guillamón following a dangerous tackle less than a minute into the match, leading to him being sent off after a video review. The hosts still took the lead when Carlos Soler converted an 11th-minute penalty kick.

Getafe also went down to 10 men in the 81st after defender Erick Cabaco was shown a second yellow card. One of its best chances to equalize came when Mauro Arambarri hit the post in the 81st.

Nearly 10,000 fans were at Mestalla Stadium as Spanish health authorities allowed the league to restart with crowds of up to 40% of the venues' capacity. Only 5,000 had been allowed in some stadiums at the end of last season in regions where the coronavirus pandemic was more under control, including in Valencia.

Looking to rebound from a 13th-place finish last season, Valencia was playing its first league match under new coach José Bordalás, who was in charge of Getafe from 2016 until last season. Getafe finished 15th last season.

The match had hydration breaks in each half despite starting at 9 p.m. local time as parts of Spain have been enduring a heat wave.

Carlo Ancelotti's Real Madrid begins its league campaign at Alavés on Saturday, while Barcelona's first season without Lionel Messi after nearly two decades starts with a home match against Real Sociedad on Sunday.