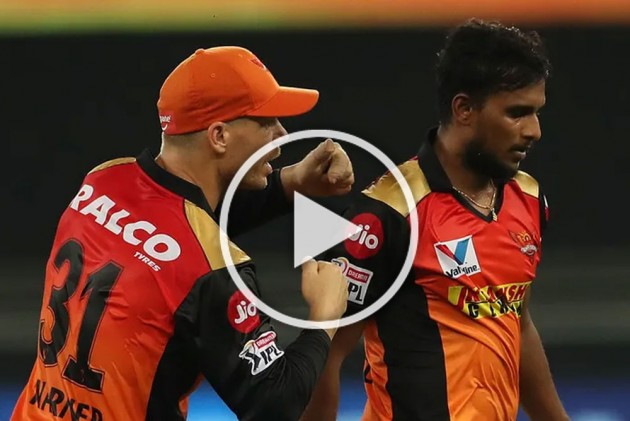 Natarajan, who plays under Warner in the Indian Premier League (IPL) for Sunrisers Hyderabad, became the first Indian to make debuts in all three formats of the game -- T20, ODI and Test -- during the Australia tour.

"First thing I'd like to say is Vazhthukal Nattu, you're an absolute legend. I've got so much time for you, you're a great person on and off the field and I love having you in our team. Cheers!" Warner said on Sports Today.

Natarajan excelled for Sunrisers Hyderabad in the IPL 2020 in the United Arab Emirates and was picked as injured spinner Varun Chakravarthy's replacement in the T20I squad. Then, featured in all three legs of the tour.

"I was fortunate enough to captain Nattu. He's an amazing guy, humble and a true gentleman. What a talent he is, we've just seen a guy who played unbelievably well in the IPL 2020, going on tour with the Indian team as a net bowler while sacrificing being there for the birth of his first child and then making his debut in all forms... what a magnificent achievement," Warner added.

Both Warner and Natarajan have been retained by Sunrisers Hyderabad for the upcoming IPL 2021 season. And the skipper already has plans for the 'Yorker King'.

"I couldn't be any happier and pleased for him. I'm very pleased and excited to see what he has to offer in this year's IPL as well. He knows what he has to do, he knows how to bowl in certain situations," Warner said. "The way we used him - outside the powerplay, maybe an over in the powerplay and bowling alongside Rashid Khan in partnership worked very well. I think he bowled 80 yorkers in the tournament which is an exceptional display of death bowling whenever he did come on. I'm extremely excited to see what he brings to the table this year."

Like other members of the victorious Indian national cricket team, Natarajan was also accorded a warm welcome. Sharing a video of Natarajan's welcome on Twitter, former India opener Virender Sehwag wrote, "Swagat nahi karoge?This is India. Here cricket is not just a game. It is so much more. Natarajan getting a grand welcome upon his arrival at his Chinnappampatti village in Salem district. What an incredible story".

Swagat nahi karoge ?
This is India. Here cricket is not just a game. It is so much more. Natarajan getting a grand welcome upon his arrival at his Chinnappampatti village in Salem district. What an incredible story.#Cricket pic.twitter.com/hjZ7kReCub

And Warner, who was keeping a tract of his team-mate, said: "We saw first hand yesterday the response that his home town gave him, it was extremely humbling to see. You had a guy there getting a thorough warm welcome for him and for what he's achieved."