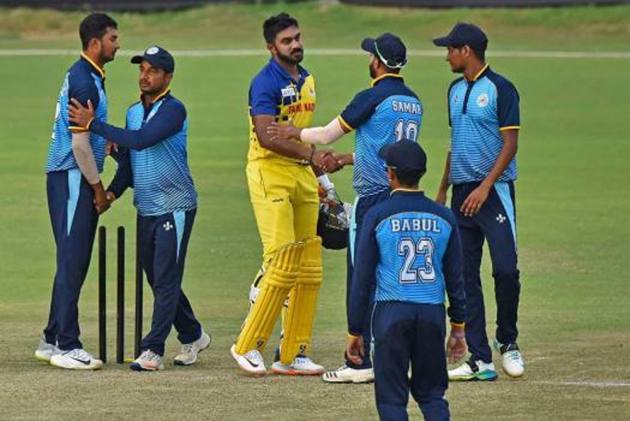 The Bihar Cricket Association (BCA) named two different teams for the Vijay Hazare Trophy on Wednesday. Plagued by infighting and allegations of nepotism and bribery, the BCA apparently withdrew the 'first' team after its selection meeting was supervised by two observers sent by the Board of Control for Cricket in India (BCCI). (More Cricket News)

Sources say the two teams were named within hours of each other. The first one, handwritten on a BCA letterhead, was signed off by the three selectors -- Aamir Hashmi (chairman), Sanjay Ranjan Sinha and Santosh Tripathi.

The second team list, this time neatly typed on a BCA letter pad, was named after Devang Gandhi and Abey Kuruvilla took part in the selection committee meeting Wednesday evening around 4 PM.

Prashant Kumar Singh was 'dropped' from the second list and replaced by Anuj Raj. Both Singh and Raj are fast bowlers.

BCA president Rajesh Kumar Tiwari told Outlook that the 'handwritten' list was 'farji' (forged). "Someone has put it in the social media to tarnish our image," Tiwari said.

It may be recalled that two teams from Bihar were named for the Syed Mushtaq Ali Trophy earlier this year. One team was picked by the 'ousted' BCA secretary Sanjay Kumar and the other by the Tiwari group. The team named by the secretary was rejected by the BCCI.

Tiwari's Bihar team for Mushtaq Ali had two players -- Sachin Singh and Amol Yadav -- with multiple age certificates. Both players have not been picked for the Vijay Hazare Trophy.

The inability of the BCA office-bearers to settle its infighting seems to have earned BCCI's wrath, but only just.

Both Gandhi and Kuruvilla, former Indian players, turned up Wednesday morning, never saw the trials held on February 9 and straight away went for the selection meeting after lunch.

"Our brief was to observe the selection meeting not to select the team. We have to trust the squad picked by the selectors and I would reckon Sanjay Ranjan, a former Bihar First class player, did an honest job and there was transparency," Gandhi told Outlook from Patna.

Gandhi admitted that the selection may not have been "100 per cent accurate" and both he and Kuruvilla had no knowledge "of what transpired before we arrived."

Bihar's cricket continues to be in a mess and BCCI office-bearers need to probe deeper than mere tokenism.