Youngster Shubham Arora came out all guns blazing with his maiden List A century as Himachal downed five-time champions Tamil Nadu under the VJD method to win their first-ever domestic one-day championship. 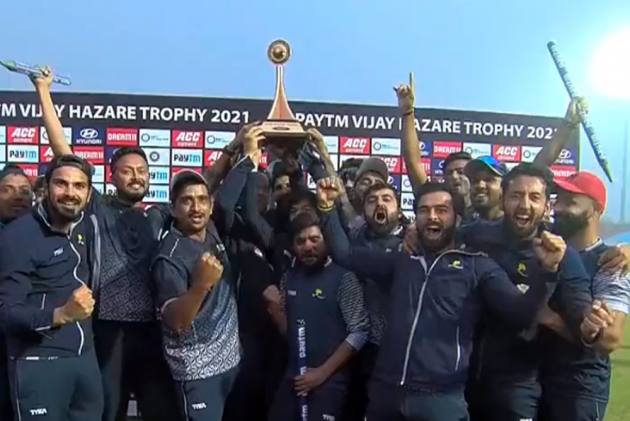 The hill state of Himachal Pradesh on Sunday reached its zenith in cricket, with a stunning 11-run victory over mighty Tamil Nadu in the final of the Vijay Hazare Trophy in Jaipur. (More Cricket News)

Youngster Shubham Arora came out all guns blazing with his maiden List A century as Himachal downed five-time champions Tamil Nadu under the VJD method to win their first ever domestic one-day championship.

Congratulations and a round of applause for Himachal Pradesh on their triumph. ðÂÂÂ ðÂÂÂ#HPvTN #Final pic.twitter.com/bkixGf6CUc

Chasing a stiff 315, Himachal Pradesh, who were playing their maiden Vijay Hazare final, responded in style with the 24-year-old wicketkeeper-batter making a fine 136 not out with 13 fours and one six.

With Himachal 299/4 in 47.3 overs, and needing 16 off 15 balls, bad light suspended play at 5pm, before Himachal were declared winners under the VJD Method.

Tamil Nadu have been the best domestic side in the country in white-ball cricket since the 2019-20 season.

After losing the finals of the one-day and T20 competitions in 2019, the team has won back-to-back titles in the Syed Mushtaq Ali Trophy T20s (2020-21 and 2021-22), but underdogs Himachal outplayed the favourites on this occasion.

On a day when veteran wicketkeeper-batter and former captain Dinesh Karthik smashed an entertaining 103-ball 116, the young Himachal glovesman outshone the seasoned pro with his well-calculated, unbeaten century under pressure.

After opting to field on a flat Sawai Mansingh Stadium, Rishi Dhawan took another fine call in sending Amit Kumar ahead of him, as the skipper chose to play the role of a finisher.

The move paid dividends as the left-right combination of Arora and Amit (74 from 79 balls; 6x4) added 148 for the fourth wicket in a match-winning partnership.

After Baba Aparajith gave TN the much-needed breakthrough by dismissing Amit, Himachal needed 71 from 54 deliveries, but Rishi played his role to perfection, hammering the rival bowling attack to make it look easy in the end.

Eyeing a record sixth title in the tournament and a limited-overs double this season, Tamil Nadu, who recently won the Syed Mushtaq Ali T20, were lacklustre on the field.

Skipper Vijay Shankar made a blunder as he fumbled when he was presented a crucial run-out opportunity when Arora was on 113.

Arora was also grassed by Jagdishan when he was on 135, with Himachal needing 18 in as many balls.

"The team has backed me throughout the tournament. I just wanted to play my natural game and built on my innings after I got set," said Man of the Match Arora.

An elated Dhawan said: "Finally we have won a title, it's the result of our hard work over the years. We knew the conditions well here and so we just to stay on there."

But Tamil Nadu effected a double blow, dismissing Chopra, Digvijay Rangi (0) in a space of five balls to leave them at 61/2 in 9.3 overs.

HP were then reduced to 96/3 in 16.1 overs with Murugan Ashwin dismissing Nikhil Gangta off his very first delivery.

But the left-handed Arora remained calm, while Amit Kumar, coming ahead of skipper Rishi, played a perfect second fiddle.

Arora and Kumar slowly pulled the game out of Tamil Nadu's hands as they struggled to break the partnership.

Arora was very strong square of the wicket and fine leg. Even fortune favoured Arora as he raced to 99 after getting a big outside edge off Sadeep Warrier, but an outstretched Karthik could hardly reach the ball.

Earlier, Karthik's century and Shahrukh Khan's fantastic finishing -- 42 off 21 balls with three fours and three sixes -- propelled Tamil Nadu after they were 40 for four at one stage.