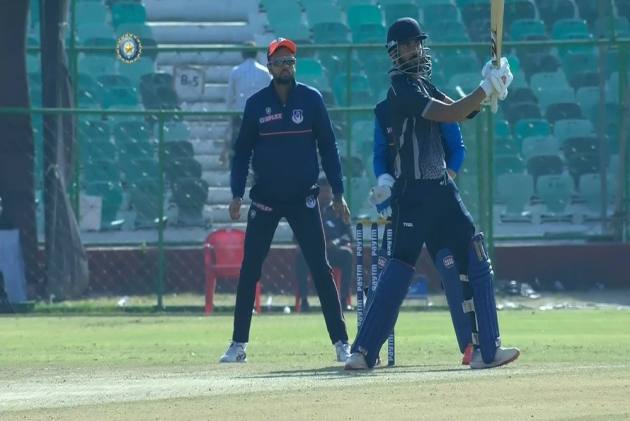 Himachal Pradesh rode on a stroke-filed 99 by Prashant Chopra as they stunned Uttar Pradesh by five wickets to storm into the semifinals of the Vijay Hazare Trophy in Jaipur on Tuesday. (More Cricket News)

First, despite a 76 by Rinku Singh, UP could only manage 207/9 as the Himachal bowlers, led by pacer Vinay Galetiya (3/19), ripped apart the opposition line-up.

Then, Chopra’s sublime knock, and a quick-fire 58 by Nikhil Gangta saw Himachal chase down the total with 27 balls to spare. Put into bat at the Sawai Mansingh Stadium, UP were reeling at 39/4 as Galetiya (3/19) wreaked havoc on their top-order.

Pacer Siddharth Sharma got the first breakthrough when he trapped opener Abhishek Goswami (17) in the 8th over. Hamirpur-born Galetiya pegged back UP further by removing Aryan Juyal (9) and skipper Karan Sharma (0) in the 9th over. It became 39/4 as Galetiya dismissed Sameer Rizvi (5).

Akshdeep Nath (32) and Rinku, who came in at number six, resurrected the innings with a 64-run fifth-wicket stand. But when it looked like the duo would score big, Siddharth Sharma (2/27) dismissed Nath, as UP lost half their side with just 103 runs on the board.

Rinku hit six boundaries in his 102-ball knock, and along with Bhuvneshwar (46 off 52 balls), added 75 runs for the sixth wicket to give their bowlers something to defend. Chasing 208, Himachal openers Shubham Arora (19) and Chopra gave the side a sedate start and added 54 runs for the first wicket in 17.2 overs.

With no scoreboard pressure, the two openers cantered towards the target, hitting the odd boundaries. However, young pacer Shivam Mavi (3/34) broke the partnership by dismissing Arora. Then Gangta joined Chopra and the two added 122 runs for the second wicket, which took the game away from UP.

While Chopra’s knock was laced with 10 fours and two sixes, Gangta struck five fours and three sixes, as Himachal cruised towards the target. UP pacer Ankit Rajpoot (2/52) brought his side back into the contention by striking twice in the 38th over, removing Gangta and skipper Rishi Dhawan (0).

Mavi removed Chopra, as the 29-year-old opener missed his century by one run. Mavi sent back Sumeet Verma (3) but Amit Kumar (14 not out) saw the team home in the company.