Venkatesh Iyer now has 348 runs from four innings at a strike-rate of 138.64 to be second behind Maharashtra 'run machine' Ruturaj Gaikwad in the most runs list of this season's Vijay Hazare Trophy. 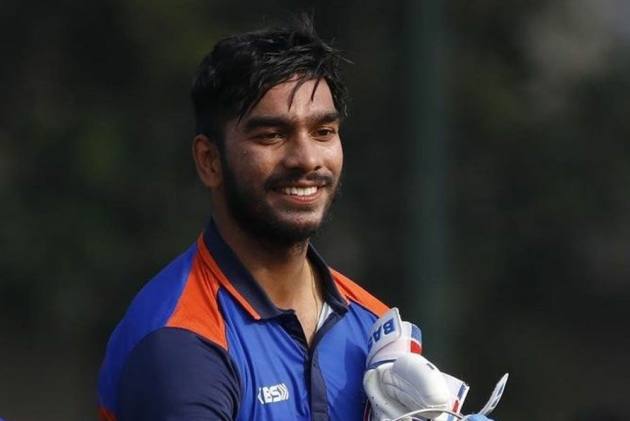 Venkatesh, who is seen as a India prospect to fill in the Hardik Pandya slot across white-ball formats, blazed his way to a 113-ball 151 (8x4, 10x6) to power Madhya Pradesh to a challenging 331/9.

Chandigarh responded in style with centuries from skipper Manan Vohra (105) and Ankit Kaushik (111) and needed 32 runs from the last 12 balls.

Bowling the penultimate over, Venkatesh gave another breakthrough dismissing Gurinder Singh en route to his 2/64 from 10 overs that included a maiden as Chandigarh could only manage 326/8.

Madhya Pradesh young gun Avesh Khan led the bowling show with 3/72, while Puneet Datey also chipped in with two wickets along with Venkatesh.

The win helped Madhya Pradesh (+0.590) remain at second place behind Kerala (+0.778) who nosed ahead in group D table with a five-wicket win over Chhattisgarh.

Maharashtra (+0.074) slipped to third place despite their four-wicket win over Uttarakhand as it's a three-way race for the knockouts from the group of death -- D -- with one match left in the league.

Opting to bat at the Saurashtra Cricket Association Stadium here, Madhya Pradesh were down in the dumps losing opener Kuldeep Gehi (0) and Rajat Patidar (2) cheaply and were reduced to 56/4 inside 14 overs.

Coming at No 6, Venkatesh soaked the pressure in company with skipper Aditya Shrivastava (70 off 80 balls; 4x4, 1x6), the duo stitching 122 runs for the fifth wicket to repair the early damage.

Venkatesh displayed some clean hitting and reached his halfcentury in 45 balls and then stepped it up further to get to his third List A century, his second in three matches, in just 88 balls.

Venkatesh now has 348 runs from four innings at a strike-rate of 138.64 to be second behind Maharashtra 'run machine' Ruturaj Gaikwad in the most runs list of this season's Vijay Hazare Trophy.

In the form of his life, Ruturaj, who has three centuries on the trot, saw law of averages catching up as he contributed only 21 in their chase of 252 against Uttarakhand at the Madhavrao Scindia Cricket Ground here.

But it was Ankit Bawne who pulled off the win with a sublime unbeaten 113, steering them home in the penultimate delivery.

Kerala gave a big boost to their net run-rate to brighten their qualifying hopes, beating Chhattisgarh by five wickets with 93 balls to spare.

Sijomon Joseph was the chief architect of their big win as the left-arm spinner returned with a stunning 5/33 to floor Chhattisgarh to a paltry 189 in 46.2 overs after they opted to bat at the Saurashtra Cricket Association Stadium "C".

In reply, Kerala suffered a triple blow midway into their chase when they lost opener Rohan Kunnummal (36), Mohammed Azharuddeen (45) and skipper Sanju Samson (0) without any addition to the total.

There was more drama in store when they lost Sachin Baby (4) to be reduced to 89/4 but their No 3 Vinoop Manoharan held on with a composed 54 not out to seal the chase.