In a first-of-its-kind fight in India, Vijender Singh takes on Artysh Lopsan in an eight-round bout. Check fight card and pay-per-view details 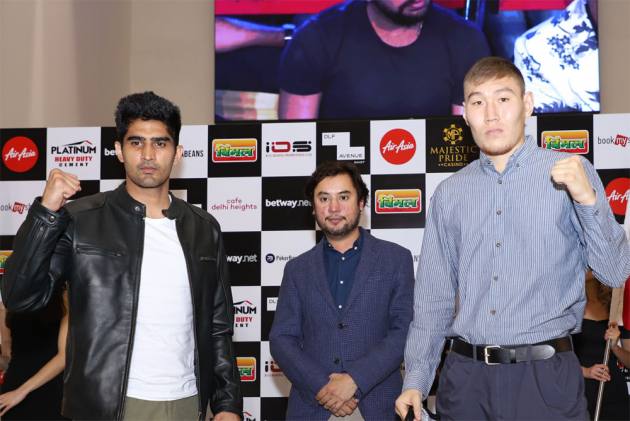 Unconquered thus far, star Indian boxer Vijender Singh would look to extend his unblemished record in the professional circuit when he spars with tall Russian opponent, Artysh Lopsan, in what is being billed as the 'Battle on Ship'. The 2008 Beijing Olympic bronze medallist has not lost a bout since turning professional, boasting of a 12-0 record, which includes eight knockouts. (More Sports News)

Vijender, 35, last bout was against Ghana's former Commonwealth champion Charles Adamu in Dubai in November 2019. And he is expected to face a stiff challenge from the 26-year-old Russian, who also has a decent record as a professional boxer.

Vijender set his weight at 75.1 kgs while Lopsan set his at the official 76.2 kgs at the official weigh-in on Thursday evening. The Indian said due to the COVID-19 pandemic, his UK team could not come to the country, and so he has been training with Jai Bhagwan.

Lopsan, who is 6ft 4-inches tall, in his six bouts as a professional boxer has won four, including two knockouts, besides suffering one defeat and a draw.

Both the boxers have been training in the coastal state ahead of the marquee event.

In another fight, the co-main event, the seasoned Neeraj Goyat, who weighs 65.7 kgs, will take on Sandeep Kumar, weighing 63.60 kgs, in the welterweight division.

The fight night begins with a bantamweight bout between Mohammed Shamim and Pralhad Panda, followed by Mathiyalagan Dhiravidamani versus Umesh Chavan in the super flyweight division.

The third fight features Ramandeep Kaur against Rinky Inder Kishore in the light flyweight category and the fourth fight is between Ashish Ahlawat and Dharmender Grewal (cruiserweight).

Seasoned Indian boxer Neeraj Goyat versus Sandeep Kumar (Super Welterweight) will be the co-main event for the night followed by Vijender’s much-awaited return to the ring.

Where is it happening?

It will be held on the rooftop deck of the Majestic Pride Casino Ship in Goa.

What is the start time?

The fight will be shown live on BookMyShow.Com and FanCode who are also the OTT partners for the event. Sony Network will telecast the show in the following week.

This is the first time in India that fight sports will be available over the OTT platforms on a pay per view. Promoters IOS Boxing Promotions said in a release that fans can watch the fight at just Rs 99.

"Following social distancing guidelines, the promoters have decided to fill just 50 percent of the tickets at the venue and only a limited 150 high-end tickets are available on sale. The tickets have been priced from Rs 10, 000 to Rs 20, 000 in different categories. They range from Gold Rs10,000, Platinum Rs 15,000, and Stage Rs 20,000," it added.